Wherever You Go by Joan Leegant 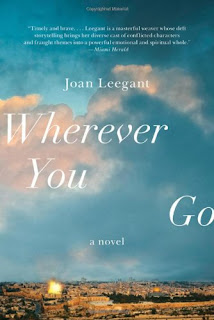 Yona Stern has traveled to Jerusalem form New York to make amends with her sister, a stoic mother of five dedicated to the hard line West Bank settlement cause.  Mark Greenglass, a gifted Talmud teacher and a former drug dealer save by religion, has lot his passion and wonders if he's done with God.  Enter Aaron Blinder, an unstable college dropout with a history of failure who finds a home on the radical fringe of Israeli society.  Wherever You Go tells the story of three Americans in Israel and the attractions  - and dangers - of Jewish religious and political extremism.

I feel a bit like the Batman villain, Two Face, right now.  I feel that I could easily flip a coin and if it lands on heads, I sort of liked the book.  If it lands on tails, I'm not so sure what my response will be.  I would prefer the coin to land on it's side, I'm just not that talented.

When I first decided that this would be a book I wanted to read, I was intrigued by the idea of a fictionalized look at religious extremism that didn't involve a Muslim.  It seems that, at least in this country, we have a habit of assuming all religious extremists belong to the Islam faith.  We tend to ignore, or turn a blind eye, towards those in the Christian of Jewish religions.  All three Abrahamic faiths have their share, a very small minority, of radicals that attempt to exploit their faith for their own ends.  What I normally see depicted though is the extreme Muslim.  So I was eager to read something that explored radicalism in another religion.

Instead of the extremism being the central point to the story, it felt more like a plot devise used to explore some rather annoying characters as they try to figure out what it is they want from life, who they are as individuals, and where they fit into society at large.  Mark was the only one of the three main characters that I actually grew to like.  He seemed to be the most developed and he alone actually grew as a character as the story developed.  The other two seemed to be stuck in the same emotional point throughout the story.

I understand that Yona and Aaron both had their own personal issues that they were wrestling with.  I'm just not sure I really cared all that much.  Yona, until shortly before the very end, seemed like a character punishing herself over a guilt she could not get rid of.  Don't get me wrong, she should feel guilty for what she did to her sister, it's just the whining and self pity got annoying at times.  Aaron on the other hand was a spoiled brat who was trying to get out of the shadow of his famous father.  I've heard a lot of reasons for getting yourself into serious trouble before, but this was just a little much for me.

I don't think it helped that the one gay character in the book was the worst nightmare of what too many straight men think of us.  He obsessed over straight men, forming rather bizarre attachments to them.  The fact he was kicked out of the military for that behavior, just made it worse for me  He was so taken in with one guy that in order to keep a hold of him, he allowed Aaron to talk him into a action that results in the explosion seen on the cover.  Then when things go wrong and the straight man is killed, the gay guy melts down and goes completely crazy.  It plays on some of the worst stereotypes about gay men.  Quite honestly, it pissed me off.

I don't want anyone to go away from the review thinking that they shouldn't read it because I didn't care for it.  I actually think most people would enjoy this one. It just didn't explore the roots of radicalism the way I thought it would.  For me, it was like the first paragraph of a really good persuasive essay that loses it's argument half way through.

I would like to thank Trish of TLC Book Tours for the opportunity to read/review this book.  Visit the tour page to read other reviews.

I love your intro! "I feel that I could easily flip a coin and if it lands on heads, I sort of liked the book. If it lands on tails, I'm not so sure what my response will be. I would prefer the coin to land on it's side, I'm just not that talented."

I've also read several books lately that I can't decide if I like them or not. The coin trick sounds like a good one ;)

I usually avoid reading novels about Israel because I'm bound to get offended, particularly if it's written by someone living in TelAviv (they have a rather distorted way of viewing anyone NOT living in TelAviv). And this book does not sound like one that I would probably enjoy, based on the examples that you cited.

I'm sorry this didn't work for you. It sounds like it had a lot of potential.

I loved how you started this review.

It looks like it took a good topic and spiraled into stereotypes. Odd since it sounded like it's goal was to tear apart those things instead of enforcing them. I don't think I'd like it for that reason alone. Oh and yea, the girl who's guilt gets on your nerves would get on mine. It's good to be guilty if it leads to growth, otherwise you just stagnate and annoy those around you. :) Great review. Too bad the book didn't pan out.

The gay stereotype would have just made me drop the book. Would not even finish it. Very admirable of you to go to the end so that you could write a fair and thorough review.

I think many stories about American Jews in Israel don't speak to the American public simply because they realize that some of the biggest troublemakers in the region are Americans who think they can come in and show the populace "how its done".

I have a copy of this book from the author for review and I'm really excited to start reading it. I'll definitely keep your review in mind though - I wonder if I'll have the same reactions you did?

Love the Two Face reference, as I've felt that way about a few books myself! Sorry this didn't live up to it's potential. I really admire that you were able to finish this one, and then write an honest, balanced review.

When you pick up a book expecting it to expound on a certain premise, and that is not really what the book is about, it's hard to get your mind into what the book is really about, especially with unlikeable characters. I agree that extreme religion of any kind (the Crusades, the Inquisition, what's going on in Palestine right now) provokes extreme characters - it's definitely not confined to one faith.

Thanks for the review.