Death Of The Mantis by Michael Stanley 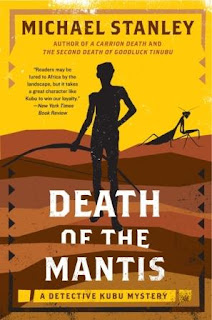 In the southern Kalahari are of Botswana - an arid landscape of legends that speak of lost cities, hidden wealth, and ancient gods - a fractious ranger named Monzo is found dying from a severe head wound in a dry ravine.  Three Bushmen surround the doomed man, but are they his killers of there to help?  Detective David "Kubu" Bengu is on the case, an investigation that his old school friend Khumanego claims is motivated by racist antagonism on the part of the local police.  But when a second bizarre murder, and then a third, seem to point also to the nomadic tribe, the intrepid Kubu must journey into the depths of the Kalahari to uncover the truth.  What he discovers there will test all his powers of detection... and his ability to remain alive.

I'm still not sure how I'm getting myself into these situations, actually I do know the reason. It's simple actually.  I don't due my research before I agree to review a book, at least I don't do it well enough.  How else do you explain my penchant for reviewing books that are actually somewhere in the middle of series.  It is simply that I'm a mystery junkie who takes any opportunity he can to read a good one?  Do I enjoy reading said book and liking it so much that I feel compelled to go back and read the rest of the series?  I think I would have to answer yes to both questions.  I'm just happy to say that this book fell right in with the pattern.

From cover to cover, this was a well crafted mystery novel that kept me engaged the entire time.  No matter how well a mystery is mapped out, how carefully it's constructed, if it doesn't have an enjoyable detective there is no reason to read it.  If the detective is cookie cutter boring, who cares about the what they are doing.  A detective needs to be different enough to stand out in a sea of mystery novels, but not so off putting you want the bad guy to win.

Detective David "Kubu" Bengu is a detective that I really think Hercule Poirot would have enjoyed working with, though he would never admit it.  Kubu, so nicknamed as a child for his size (think hippopotamus,) is one of the most enjoyable "new" detectives that I've come across in a long time.  He seems to have such a wonderfully developed sense of self, without being egotistical (Hercule Poirot) about it.  He knows his limitations, but he trusts his own judgements and follows through with them.  He is dedicated to his family and his job, and though there are tensions between the two, he seems to have found that perfect balance.  It's rare for me to really love a detective that wasn't dreamed up by one of yesteryear's mystery mavens.  So when it happens, I want to dive into every book they are in.  I'll now be going back and reading the books I've missed, and I'll be looking forward to the new ones as they come out.

I would like to thank Trish of TLC Book Tours for the opportunity to read/review this book.  Visit the tour page to read other reviews.

It sounds like reading this one out of order worked well for you. I'm going to investigate this series.

A good detective and an interesting, how can I pass this one up? On the other hand, how can I start another series?

I read this one a few weeks ago for the tour and really enjoyed it as well. I felt like I learned a bit about the Bushmen culture as well as reading a good detective mystery!

Ryan, it's great that you enjoyed this one enough to consider the earlier ones. Sounds like a good mystery.

I find that all the time at the library, I pick a book that is in the middle of series and then have to backtrack if I like it to read the others. Glad you enjoyed this one.

Is it bad that I'm sort of laughing at you, since you now have to add the rest of this series to your ever-growing TBR list? :)

You are SO RIGHT about the detective really making the story - without a great main character, the mystery itself isn't worth reading.

I'm so glad you enjoyed this one Ryan! Thanks for being a part of the tour. I'm featuring your review on TLC's Facebook page today.