The Oracle of Stamboul by Michael David Lukas 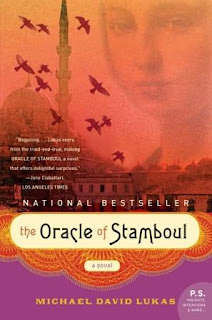 Ushered into the world by a mysterious pair of Tartar midwives late in the summer of 1877 i the town of Constanta on the Black Sea, Eleonora Cohen proves herself an extraordinary gifted child - a prodigy - at a very young age.  When she is eight years old, she stows away aboard a ship, following her carpet merchant father, Yakob, to the teeming and colorful capital of Stamboul where a new life awaits her.

In the narrow streets of this city at the crossroads of the world, intrigue and gossip are currency, and people are not always what they seem.,  But it is only when she charms the eccentric Sultan Abdullhamid II - beleaguered by friend and foe as his unwieldy realm crumbles - that Eleonora will change the course of an empire.

I think I'm going to make some people howl with this review, if you are one of them, I apologize.  Well, not really, I just thought it would be a nice thing to say.  Getting the apology up front means I don't have to do it later.

To be quite honest with you, I went into this book thinking I would love it.  It had a wonderful concept and was set in a locale that I have always been fascinated with.  My grandfather was stationed in Turkey for a long time, and while I've been to Ankara, Istanbul has always been on the top of my list of places I would love to visit.  About the only thing this book did for me, was make that desire grow in leaps and bounds.

The settings was everything I expected.  The author was able to make the city breathe for me in a way that I found fascinating to read.  I felt as if I was there with Eleonora as she stowed away on the ship her father was taking to the city.  I was holding her hand as she visited the Sultan for the first time.  Everything was brought to life in such a mentally tactile way, that I found myself lost in the sensation of it all.  I just wish it had been enough to save the book for me.

Where I felt let down, was in the characterization.  There was not one character that felt completely real to me.  None of them, Eleonora included, felt as if they were flesh and blood.  Instead they all seemed to be ethereal phantoms that had just stepped out of the author's cerebral cortex, not yet fully formed.  They were mere ideas, not concrete forms.  Normally I can overlook shadowy characters if at least one of them is solid, hopefully the main character.  In this case, while Eleonora was definitely the most opaque of them all, I just couldn't buy her as a real human being.  She was too perfect, too much of the idea, that she never moved beyond it.

Eleonora is a child, but not once, do I ever get the impression that I'm reading about the life of an eight year old.  If her age hadn't been mentioned, on more than one occasion, I'm not sure she would be any different than the adult characters.  She never behaved as if she were a child.  In my experience, there is no such thing as a perfectly well behaved kid.  If you have one, please let me know how you did it.  Every single one of them do things that get them in trouble.  It's part of growing up.  Eleonora on the other hand seems as if she was born an adult.  She's too perfect.  She has no flaws, no personality defects; there is nothing about her that causes any conflict, other than those born of her being perfect.  I guess what I'm trying to say is that she is a boring character.  Unfortunately, that aspect of her influenced the way I felt about the book itself.  There was a sense of shallowness to it all, a dullness that I just couldn't overlook.

The book did leave me with one rather burning question though.  In the book the author compares the twinkling of stars to jellyfish.  I've been trying to figure out what the hell that means ever since.  At first I was thinking about the jellyfish you put in fish tanks with black lights.  I figured that couldn't be it since that part of the book took place in 1885.  So please, if you have any clue what he was talking about, will you let me in on it.

I would like to thank Trish of TLC Book Tours for the opportunity to read/review this book.  To read other opinions, please visit the tour page.  To find out more about the author, Michael David Lukas, visit his website.

I'm disappointed to see this didn't live up to your expectations because I had high hopes for it too. I have no clue about the jellyfish/stars analogy.

Oh No! The reviews do seem mixed. Sorry this didn't live up to your expectations. I have an unread copy, so someday I hope to try it.

I think you are spot on with the character analysis, but I think that is why I liked it. Felt sort of mythological for me.

As to the jellyfish - don't some of them glow on the surface of the sea at night? Under the moon? I'm thinking iridescence...

It is a wonderful first effort and is ele­gantly crafted but the ending...well, no ending actually disappointed me. Also I thought the plot was underdeveloped.

However, I did love the setting and the history.

I'm posting about this later in the month, but haven't read it yet - it's good to know about the strengths and weaknesses in advance. If I can work out what the jellyfish/star thing is all about I'll let you know :-)

Oh, how disappointing! I've been so curious about this book for the same reason you stated - a passion for Turkey. Everything about it sounded so good but I am thoroughly swayed by your detailed review, Ryan.

Your reviews always make me laugh and think about things...since when do jellyfish compare to stars??? the setting does sound fantastic to me and I would LOVE to visit this country myself, but if those characters don't work there's not much else you can do but cry!! I loved your review Ryan and you confirmed that I do not have to add this book to my list of ones to read.

The synopsis on this one just never really grabbed me, and after reading your review, I think I'll just pass.

I don't think this one would have grabbed me even before your review. I have to say as a parent and as a teacher, I agree that there is no such thing as a perfect child, although I have to say when kids are one on one with an adult they seem to be a little better behaved. Interesting premise and that is awesome that the author was able to nail the settings so well that you could feel them!

Too bad -- I'm one who loved this when it first came out -- the sort of incomplete feel to the characters and plot gave it a sort of mythic/fairy tale-ish feel to me.

It's a shame when a book doesn't live up to your expectations. I agree that characterization is important and when it falls flat, it can ruin the whole book for a reader. I'm glad that you wrote such an honest review. And no, I have never heard of a child that is perfectly behaved at all times. Mine surely are not! LOL!

I'm curious about the jellyfish thing too so if you find out, please let me know.

Ryan, although I had high hopes for this too, it disappointed me in different ways. I happened to love the characters and I found them more alluring being as shadowy as they were, my problem was the narrative, I found it lost it's fluency at times.
Thanks for the great review.
Deb

Darn, I'm sorry this one disappointed you Ryan. Hopefully there isn't too much howling from those who did love it! :)

Thanks for sharing your thoughts for the tour!

This was somewhat of a letdown for me as well, although for different reasons. I loved the descriptiveness - you could almost picture the sights and smell the smells. I didn't like the vagueness of the central idea and the ending that sort of just petered out with no real resolution.