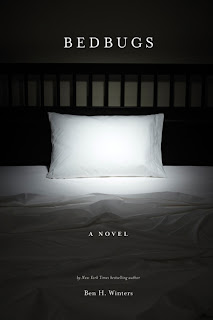 Susan and Alex Wendt have found their dream apartment.

Sure, the landlady is a little eccentric.  And the elderly handyman drops cryptic remarks about the basement.  But the rent is so low, it's too good to pass up.

Big mistake.  Susan soon discovers that her new home is crawling with bedbugs...or is it?  She awakens every morning with fresh bits, but neither Alex nor their daughter Emma has a single welt.  An exterminator searches the property and turns up nothing.  The landlady insists her building is clean.  Susan fears she's going mad - until a more sinister explanation presents itself:  she may literally be confronting the bedbug problem from Hell.

Normally I love to read horror books once the weather starts to get a little chillier.  There is something about having that nip in the air and the shorter days that makes me want to curl up on the couch, with as little light as possible, and delve into something that will scare the hell out of me.  Sadly, due to time constraints, I had to read this one when it was over 100 degrees outside and not getting dark until after nine o'clock.  For once, that didn't bother me, I was still able to forget about my surroundings and get so lost in the story, that I would be checking my pillows for any scurrying creatures before I would set my head down for bed.

I'm addicted to a lot of the horror novels written in the 60s and 70s, and this one has that retro vibe for me.  Two of my favorites,  Rosemary's Baby by Ira Levin and The Sentinel by Jeffrey Konvitz, even start off the same way.  Young couple/single woman moves into a new apartment and everything seems to being going right at first.  Of course there are always subtle hints that not everything is as it should be.  Eccentric neighbors always seem to be around, strange occurrences that only happens to one of them (normally the woman), and a miasma that seemed to hang in the air, slowly suffocating the inhabitants of the apartment.

This book had all of that and so much more going for it.  The author had an almost supernatural ability to balance the home life of the Wendt's with the growing sense of apprehension.  A lot of horror books I've read will sacrifice the characters for the story.  Thankfully Bedbugs isn't one of them.  A story that asks the reader to believe in something so personal as a malignant presence that attacks you in the bed, has to have characters that you not only believe, but care about it.  As a reader, you have to be able to relate to them.  Susan, Alex, and Emma are fully functional, 4D characters that were a treat to know.

The horror was built slowly, it worked it's way towards a simmer, and then boiled over in such a way that the sheer violence of the climax left me holding my breath and gasping for proverbial air.  I was horrified, and thrilled by the conclusion even though I saw it coming a mile away.  A good horror book doesn't have to throw out an ending that comes out of left field.  A good horror novel will allow the reader to figure out the ending, but still horrify them in the end.  It's needs to be believable no matter how outlandish the plot points.  It's hard to write a credible story that will leave a reader altering their bedtime habits. Bedbugs not only pulls it off, but it pulls it off in such a way that you won't know what hit you until you are going to bed the night after and you are still checking for telltale signs of an infestation.

I have these welts on my ankle that are super itchy, but my husband has none....could be be????? LOL

I already check the bed whenever I stay in a different place - this book will probably have me obsessing over it! I should get this one soon and hope to read it in October - it should put me in the mood for Halloween!

Not very much creeps me out but I am pretty sure I would be squirming with this one. I definitely want to read it!

Seriously. This is the kind of horror story that I live for. Thanks for bringing it to my attention. Your review delivered on the creepiness that awaits me!

I may be a bit too squeamish for this one!

I normally do not read scary books but your review freakin' rocked and makes me want to grab a copy of this one right now. But then I'm afraid I may not be able to sleep in my bed!!!

Okay, I'm not much of a horror reader, but this one does sound so good. So glad you enjoyed it even in the hot weather. :) Great review!!

I just skimmed your review because I have a copy of this to read myself. I'm glad to hear you liked it though. I just might wait until it gets a little cooler...

This one sounds like it has all the elements to make a really effective horror story in that it takes a commonplace scenario which most everyone has experienced, moving into a new place, and takes it to the extreme. The idea of bed bugs make me shiver; I'm really glad I read this review right before going to bed. Thanks, Ryan.

Freakin fantastic review, I love good horror and your comment "the sheer violence of the climax left me holding my breath and gasping for proverbial air" sold me on this one!

Okay, first of all, this really will be a horror novel for me based on the sheer fact that Wendt was the last name of one of my worst boyfriends ever...LOL!

I knew when I first saw this one that it was going to be a must-read. Now that I know you really liked it, I know I can't go wrong. Great review!

Not expecting this at all, Ryan. I mean, when I saw the cover and read the synopsis, I knew it would be creepy, but I also thought it'd be kind of funny. But violence? Yikes!

Thanks for the point about what a good horror novel entails. I don't read many horror novels so I wasn't aware.

Retro horror is so my thing! Thanks for the review, I've just put this on my list.