The Sentinel by Jeffrey Konvitz 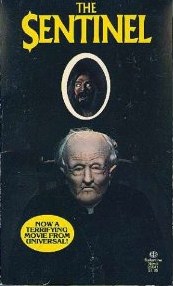 A beautiful young model.  The old brownstone apartment she simply had to have.  The grotesque blind priest who watched down on her day and night from an upper-storey window.  The pair of perverted creatures who want her to join their circle.  The mad little old man who gave her tea and sympathy.  The cool calculating, supremely rational lover who first mocked her fears.  And the secret you will never be able to forget, even if you try...

For many years I've been  a huge fan of the 1977 movie, "The Sentinel", that was based of this book, published in 1976.  As much of a fan as I was, I had never read the book before.  Now this is mainly due to the fact that trying to find a copy is almost impossible, I finally found a battered copy at the flea market.  I normally will not buy a book in bad shape, I had not choice but to do it.  I've been sitting on the book since then, waiting for Oct. to read it and the wait was worth it.

Allison Parker has just returned to NYC after leaving town to tend her dying father.  Because of their past, Allison is still in a sort of daze after the prolonged period of time she was out of town dealing with his sickness and eventual death.  She is just relieved to be back in town and to see her boyfriend, Michael Farmer.  Naturally, he is not at home as she was expecting as he was called out of town for business.  Left to her own devices, Allison starts to look for her own apartment since she had been forced to give up her previous one due to being out of town for so long.

When she finally discovers the brownstone apartment, she falls in love with it.  She has a sense that maybe she has found home.  At first nothing seems amiss, she has been living a quiet life waiting for Michael to return back to town, then she starts meeting her neighbors.  They are rather an eccentric lot, some more menacing then others, but eventually Allison starts feeling that something is wrong with those she is sharing the building with.  She starts hearing noises in the apartment above her that is supposed to be empty.  She starts seeing things that aren't there and dwelling on a past that is best forgotten.  Before she knows it, she is plunged into a nightmare of past misdeeds, growing weakness of mind and body, and an evil that knows no bounds.

I said earlier that I'm a big fan of the movie, to be honest I wasn't thinking the book would add anything to the experience.  I can honestly say that I loved the book even more and I'm so thrilled that I finally got a chance to read it.  Now you may think that it's pretty obvious, the book is always better than the movie, that's not always the case with horror though.  Thankfully this time, the old adage rings true.  The book filled in the gaps the movie didn't quite explain.

I'm not going to get into the twists and turns of the plot, but I will say that just when you think you are starting to figure things out, the author does a brilliant job of turning the story on it's head.  This is a book that has a lot to do with the past and decisions that were made before the action starts.  Misdeeds and bad choices force the characters onto this journey and it's one where very few of them come out unscathed.  Some of them will die, others will be changed beyond recognition, and others will disappear as if they never existed.  It's a brilliant book that plays around with the notion of Good vs. Evil and the role the church plays in that battle.

On a cultural side note, it took me a bit to adjust to the way lesbians are referred to in the book.  I know this was written in the mid 70s and that times were different, but the language used to describe the two women was borderline offensive.  Actually, if this language and attitude were used in a current book, I would be offended by it and I would not have been able to finish reading it.  As it stands though, I had to remember the era the author was working in and brush my reaction aside and chalk it up to a more ignorant time.  While it did distract me for a bit, it didn't ruin the book for me.  Thankfully, I was able to move on and enjoy the suspense and atmosphere the author created.

Here is the movie trailer if anyone is interested.

This book is going to qualify for 2 different challenge; R.I.P V Challenge hosted by Stainless Steel Dropping and the Thriller & Suspense Reading Challenge 2010 hosted by Book Chick City.
Posted by Ryan at 10:02 AM

It's not a movie I'll watch, horror movies are just not my thing. The book, though, sounds creepy in a good way.

Sometimes I just love a creepy book and this one sounds like it has that creep factor in spades!!!!!

I recently read a book ,written in the early 60's, in which the female characters were portrayed in such an insulting manner that if it were a modern book I would not have continued with it. But like you, I excused the author because of the time period in which the book was written, and continued reading.