Jane And The Damned by Janet Mullany 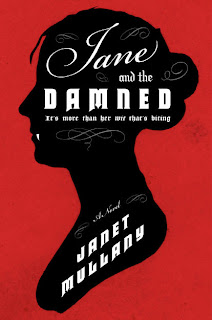 In 1797, when aspiring novelist Jane Austen becomes one of the Damned, the beautiful, fashionable, sexy vampires of Georgian England, her family insists she takes the waters at Bath, the only known cure. But the city becomes a blood bath when the French invade and the Damned are the only ones who can overthrow the French and save England.


Jane now regards her creation as a vampire as a gift. She rejects the cure and discovers a world of freedom, love, and adventure as a vampire. But as an immortal, she loses her ability to write and must sever ties with her beloved sister Cassandra and the rest of her family. Under the shadow of the guillotine, Jane will have to decide whether eternal life and love are too high a price to pay for the loss of what means most to her as a mortal.

Since I'm not a Jane Austen purist, and I know that there are a lot of you out there, I'm not all that shy from straying into territory that some may find a little horrifying.  I'm a big fan of Pride & Prejudice & Zombies, so I figured why not try a novel that takes the author herself and turns her into one of the undead.  The premise sounded promising and I figured if nothing else it would be a fun read.  Unfortunately for me, while it was fun at times, the ending left me so cold, I could be mistaken for one of the Damned.

I found Jane to be a fun, intelligent young woman who was just coming into her own in life when she was turned by a rather fickle vampire.  Abandoned by her creator she is forced to deal with her change on her own and it talked into, by her father, taking the cure.  Once there though she is thrust into a world unlike the one she was familiar with and she quickly realizes that maybe there is more to this "damned" thing that she first thought.

Where the book started to lose me, were the scenes where Jane is forced to deal with the French military officer that has forced himself onto her family and is living in their home.  I found myself skimming through those sections, waiting for her dealings with her fellow vampires, which I found to be way more interesting to read about.  These were the sections of the book that made me glad I chose to read this one and they kept me engaged in an interesting world that quite honestly sounded like a lot of fun to me.

If you plan on reading this book and don't feel like having the ending SPOILED, don't read past this point, because I can't discuss the ending without SPOILING it.

Jane's decision at the end to go back to her old life and become mortal again after the French are forced out of the city, made absolutely no sense to me.  Jane has gotten to a point in her journey where she is accepting of her fate as one of the Damned and has fallen madly in love with a fellow vampire, Luke, who took her under his protection and helped her along the way.  She has been accepted by those she has gotten to know and understands the gifts that she now has at her disposal.  She decides to give it up because she can't stand to be away from her family, especially her sister Cassandra.  She has also discovered that she can't write as one of the Damned.  Her ability seems to have vanished along with her transformation.

Now this makes sense, I can see a lot of people making the same decision she makes.  My problem with it is it doesn't seem to be supported by the story.  We are told she loves her family, is close to her sister, and enjoys writing more than anything else, but you never really feel it come across.  The relationship with her sister seems loving but the idea of them being inseparable just doesn't really come across in either action of dialogue.  Nor does her love of writing, you can tell she enjoys is but I never felt that it was a life long passion she couldn't do without.  Even when she is thinking about the loss of the ability, it felt more like having to dye your hair a different color and missing that old color than she was going to missing an integral part of her.

Instead Jane seems the happiest when she is discovering and using her new abilities, when she is with her fellow vampires, and when she is with Luke, the man she has fallen in love with.  She comes alive in these scenes, I truly liked her as a character in those moments.  She is full of vigor and spunk and she is someone I would want to get to know.

I don't mind endings that I don't see coming.  What I do mind are endings that are really supported by the plot points the author spends developing throughout the rest of the book.  I want an ending that makes sense, and this one doesn't.  It took what was a fun, light story and turned it into a book I will probably not visit again.

I would like to thank Trish of TLC Book Tours for the opportunity to read and review this book.

You can learn more about Janet Mullany (for some reason I can't load her photo so I apologize for that) by visiting her website, twitter, or facebook.

You can find more reviews by visiting the tour page.
Posted by Ryan at 12:13 AM

Great review, Ryan. I too loved Jane as one of the damned - - she was a fantastic vampire. And I loved the character of Luke.

Maybe we'll see him again in the future?

Well, you know Ryan, if Jane didn't go back to her family and write her novels, the book would be historically inaccurate!

I find the premise of the book oddly intriguing but since I don't plan to read this (since I'm not into vampires) I went ahead and read your spoiler section. I think that maybe the author pulled more from the real-life Jane Austen to come to that ending rather than from her book itself - but of course I haven't read it so that's just a guess.

Still, I'm glad you were part of this tour and I enjoyed reading your review. Hopefully your next book won't leave you feeling like one of the Damned at the end. :)

Lori, Hopefully without the fickle Jane :-)

Tasha, And that would be a bad thing how?

Heather, I agree that's probably where it came from but for those of us who don't know anything about her, it would have been nice for it to be more concrete in the book itself.

I just finished writing my review and wanted to check out what you thought..whew! Glad to know that I wasn't alone in my opinion on this one!

I can't decide if I want to read anymore books of this nature... It is getting a bit overdone to a point that it is almost a genre all of it own.