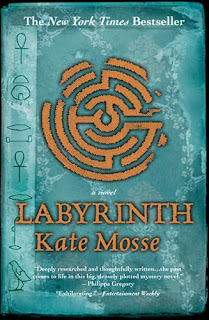 Two women separated by 796 years are thrust upon the same journey of religious freedom and discovery.  Alice Tanner is volunteering on an archaeological dig in the Pyrenees mountain in July of 2005.  What she discovers there will connect her with a young woman named Alais who fled form the city of Carcassonne in the year 1209.  This is a story of two women who must fight for their lives in order to protect those they love and the Grail.

I read this a few years ago when it first came out but had almost forgotten what it was about when I saw it on sale at the Friends of the Library Book Store.  It was in great shape and only a $1 for a hardcover so I picked it up knowing that I would read it eventually.  When it was picked for our Tuesday Book Talk on twitter, I was excited to rediscover what was within it's cover.

What I found was a richly fleshed out story that pulls you in despite it's slow going at times.  Alice and Alais are both strong women who seem to take on the weight of the world when they are forced, one to discover the other to protect, a secret that could alter humanity for either good or bad.  The secret of The Grail has been protected by men and women of all faiths and backgrounds in order to keep it out of the hands of those that would exploit it for their own power.

I found myself getting lost in the struggle and mesmerized by the locales both women found themselves in.  Kate Mosse, in my opinion, captured the region and it's culture in ways that I found fascinating. The language alone that she uses both in it's antiquity and in it's beauty kept me entranced by the story, almost more than the plot itself.  I found myself enraptured by the beauty of the story and never wanted it to end. Now how much of that description and language choices are accurate to the time period, I have no idea.  Nor do I have a clue on the religious history of the region that she recounts in this book.  I'm going to take it at face value though and assume that she is using real history to tell a exciting story that spans almost 800 years.  Whether this book is partly based on historical facts or not, I really don't care.  What I do care about is a story that despite it's flaws, and it does have some, I found myself caught up in it anyway.  That's the most I can ask of any author, and this one delivered.

I picked up this and the next book pretty cheap - I'm glad I did based on this review! Thanks, Ryan!

I've thought about reading this one in the past. Now it looks like I will have to one of these days...I like it when an author delivers!

I have started this book a couple times and enjoyed it, but I am not having much luck finishing it. One day I must!