The Games Bible by Leigh Anderson 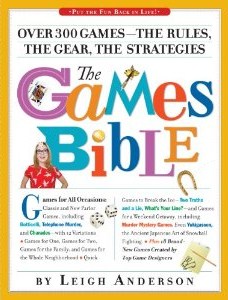 Part Of The Synopsis From The Back Cover:

For parties, for dinners, for holidays, for a weekend away, for dorm rooms and vacation homes, The Games Bible is a comprehensive compendium celebrating the old-fashioned pleasure of pure play.

When I first got this book in the mail, I was thinking there is no way I'm ever going to be able to play every game in time for a review.  Ok, just joking....I'm really not that out of it..well maybe just a little.  Either way I'm digressing from the matter at hand.  Simply put, I think I just found the mother load of fun!

This covers of this book contain around 300 games and activities that will leave you howling in laughter and having one of the best times of your life.  The book is broken down into 17 chapters, mainly divided by categories, 15 of them exactly.  They range from card games to trivia games along with outdoor games and lawn games.  For those of you who like something a little smarter, there are trivia games, literary and word games, right brain games, and something called brainy games for 2.  I think you get the point, whatever situation you are in, whatever you feel like doing, there is a game for you.

One of my son's favorite card games is in the book, Go Fish.  We hadn't played it in a while so when I found it in the book, we broke out the cards and played a few games.  The sad thing is, I got beat every time.  My card skills are sorely lacking.  Now one thing I did learn about card games from this book is that for my entire life, I've though I was playing Gin Rummy.  Come to find out, I've been playing 500 Rummy instead, who knew.

Now what I really want to talk about is a game that I've never even heard of until now and I wish I could get 20-30 people organized to play it.  It's listed in chapter 17 which covers outdoor games.  The game is called Assassin and I really, really want to play.  I'm going to quote form the book as I think it does a wonderful job explaining it to you.  As a warning though, I'm pretty sure you will want to play this too.


Assassin is what is know as "lifestyle-invading"  which means you play it over a course of days or weeks while you go about your regular daily activities - with no break.  You can hunt or be hunted as any hour of the day or night - every player is both a stalker and a stalkee.  You play on your own - there are no teams, and players aren't in the same location with other players at any time - except for the moment of assassination.  It's often played on school campuses - Curtis Sittenfeld details a bout of Assassin in her novel Prep.  At the start of the game (which is usually a predetermined time announced by e-mail), you will receive, via e-mail, a photograph and some vital details (home address, work address) of your prey.  Someone else will receive your information.  Players must "assassinate" their prey -either by tagging them, shooting them with a water gun, or simply cornering them - while trying to avoid the same.  You'll become wildly paranoid.  It is not a game for the faint of heart.

Now how can you not want to play that.  The books goes into details about how you may want to set up safe zones where it is not allowed to get someone, bathrooms, inside work spaces, and in church are probably good boundaries to set.  I don't think it would be a good idea to be fired or thrown out of church cause someone comes in and squirts you with a water gun, though It may be a little fun to see how others react.  One someone is out of the game they have to hand their target over to the person who took them out.  The winner is either the last one standing or if there is a time limit it's everyone who's left.

So now I just need to get, the book says between 5-50, people together and start "assassinating".  In the meantime, I'm going to be just fine playing the rest of the games in this fantastic addition to my collection.

I would like to thank Alexandra at Planned Television Arts for the opportunity to review this book.
Posted by Ryan at 2:00 PM

This sounds like a handy book to have! Sadly, we rarely play games now that our son is grown.

Sounds like a great book, but you know I love games.

Kathy - Adults can play games too.

Sounds fantastic!!! I love playing games and my latest favorite is the boardgame Carcassonne, which is horribly addicting.

I am reviewing this one today Ryan and I just loved it! I am such a gamer and I am always looking for ideas that are easy and fun to use as ice breakers at meetings or just game time with family.