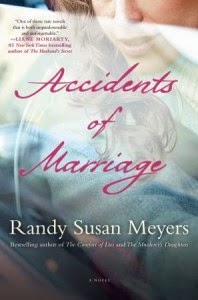 Maddy is a social worker trying to balance her career and three children.  Years ago, she fell in love with Ben, a public defender, and was drawn to his fiery passion.  But now he's lashing out at her during one of his periodic verbal furies.  She vacillates between tiptoeing around him and asserting herself for the sake of their kids - which works to keep a fragile peace - until one rainy day when they're together in the car and Ben's volatile temper gets the best of him, leaving Maddy in the hospital fighting for her life.

August 2nd, 2010, was the day I reviewed The Murderer's Daughters by Randy Susan Meyers.  It was the day I was finally able to wax profusely on how much I loved the book, and how deeply I had fallen in love with the author's narrative voice.  That book is the whole reason I agreed to review Accidents of Marriage, which is not a book I would normally read.  But since I'm just about willing to read anything written by her, even if she had decided to publish her own phone book, there was no way I was going to pass this one up.

To be perfectly frank, if this book had been written by anyone else, I'm pretty sure I wouldn't have liked it at all.  It's not the type of subject matter I normally get caught up in, especially since I always feel as if the husband is being given the short end of the stick in these types of stories.  And to be even more frank about it, while I think this book is written in the same narrative flow that The Murderer's Daughters was written in, I can't say that I enjoyed it all that much.

The difference for me is that I was able to relate to the subject matter in the first book.  It reflected some of my own past, so I got lost in the characters and their stories.  In Accidents of Marriage, I couldn't relate to most of what was going on, and to be even more honest, I found myself siding, if that is even a fair word to use, with Ben most of time.  I think the book was beautifully written, as is anything Randy Susan Meyers chooses to write, but I couldn't find that personal connection to it.

Off the top of my head, I can name about 50 people I know who would love this book, and would be able to connect wit the subject material.  I'm willing to admit that the issue here was me, and my inability to connect, which can not be blamed on the book.  I knew going into it that it probably wouldn't be the book for me, and I was right.  At the same time, I'm glad I read the book, and I would make the same decision over again.  Randy Susan Meyers is a fantastically gifted writer, and she is one that I will always choose to read, regardless of whether or not I end loving it as much as I did The Murderer's Daughters.

I would like to thank TLC Book Tours for the opportunity to read and review this book.  Please visit the tour page to read other reviews.
Posted by Ryan at 11:42 PM

I've tried and failed to get this book! You've got me intrigued as well.

I am intrigued by the fact that you found yourself siding with Ben since in the blurb at the top of your review, he doesn't sound like a character who would be easy to sympathize with. That makes me think their relationship must be portrayed in a pretty complex, balanced way. Maybe I'll give this book a try.

I appreciate your fair and balanced review and think I'd probably like the book.

I read this book because I loved the author too. I connected to the TBI part and understand your feelings about Ben.

I just reviewed this one too Ryan. My heart broke for the children, especially Emma, the 'extended' family failed her, IMHO lol. From my nursing experience I thought the traumatic brain injury was sensitively and very realistically written. I'll definitely check out The Murderer's Daughter.

Thanks for sharing your thoughts on this book for the tour.