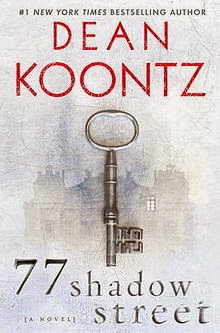 The Pendleton stands on the summit of Shadow Hill at the highest point of an old heartland city, a Golden Age palace built in the late 1800s as a tycoon's dream home.  Almost from the beginning, its grandeur has been scarred by episodes of madness, suicide, mass murder, and whispers of things far worse.  But since its rechristening in the 1970s as a luxury apartment building, the Pendleton has been at peace.  For it's fortunate residents - a successful songwriter and her young son, a disgraced ex-senator, a widowed attorney, and a driven money manager among them - the Pendleton's magnificent quarters are a sanctuary, it's dark past all but forgotten.

But now inexplicable shadows caper across walls, security cameras relay impossible images, phantom voices mutter in strange tongues, not-quite-human figures lurk in the basement, elevators plunge into unknown depths.  With each passing hour, a terrifying certainty grows: Whatever drove the Pendleton's past occupants to their unspeakable fates is at work again.  Soon, all those within it's boundaries will be engulfed by a deadly tide from which few have escaped.

When do you give up on an author you used to love?  When do you finally say, enough is enough, their new stuff sucks, I'll stick to what I already love?  With Stephen King, it took reading Insomnia for me to get to that point.  The damn thing should have been marketed as a cure for the ailment.  I actually stopped reading Dean Koontz years ago.  I don't even remember which book(s) finally turned me off of his new stuff, but for whatever reason, I was never willing to totally give up.  I almost bought 77 Shadow Street when it first came out, but I kept putting it off.  It wasn't until the hardcover was less than $6 at Barnes & Noble, earlier last month, that I finally decided to give it a go.  I kinda want my money back.

I can never stress how much I wanted to love this book.  To start with, I'm a huge haunted house fan.  I want to like any book that can suck me into dark halls and claustrophobic rooms.  I can read The Haunting of Hill House by Shirley Jackson, Hell House by Richard Matheson, Drawing Blood by Poppy Z. Brite, The Sentinel by Jeffrey Konvitz, Burnt Offerings by Robert Marasco, or Bedbugs by Ben H. Winters a bazillion times, and never be bored.  It's the whole reason I watched 666 Park Avenue, it sure wasn't for the acting.  Whether it's a book, movie, TV show, or something else; if it involved a haunted house, I'm there.  Hell, I've even lived in a haunted house, though it wasn't as exciting as the movies make it out to be.

On top of that, I used to love Dean Koontz's books when I was younger.  I still love a few of them; Watchers, Strangers, Phantoms, and Lightning being the ones that come to mind.  So put the two together, and it should have been a slam dunk.  Instead, it was a foul ball that hit the catcher in the face.  It was such an odd mishmash of nanotechnology, time travel, temporal portals, mad scientists, and the meaning of life.  It was disguised to look like a haunted house story, but it wasn't.  The plot was so convoluted, I'm still not sure on some of the things that happened.  Nor do I really think I care.  It felt as if the story was constructed by picking themes and events out of a hat, and stringing them together. The only redeeming quality was some of the characters, but there were so many of them, that the ones I liked weren't on screen long enough. Nor do you really have enough time to spend with them, to truly care about what happens to them.  The hero of the piece, though he may have some of the characteristics of some of his earlier heroes, he's never developed enough, not like what I expect from Koontz.

To answer my own question, I think I'm finally willing to admit defeat.  I will not be picking up any more of his new work.  Instead, if I need a Koontz fix, I'll go back to the books that I know I love.

I think this is what happens when they try to crank out books too fast to meet publishers' demands.

It is such a letdown when you realize you no longer like a favorite author's work. :-/

Ouch! I'm about to read my first Koontz book, this one! It's the selection for my GoodReads Tuesday Book Talk group, and I did vote for it. I thought the premise sounded great. You know, sometimes I think writers need to shake it up a bit and stop trying to do the same thing time after time. I'll let you know what I think of it come end of Oct. :)

We're reading this for TuesBookTalk in October. I didn't fully read your review in case of spoilers. I have to admit that the last two newer books I read of his I was not overly thrilled with, but I haven't given up on him yet. It will be interesting to see if our opinions differ on this one. We have pretty similar tastes and likes in this genre (well, except for our debate over The Haunting of Hill House and Hell House...lol).