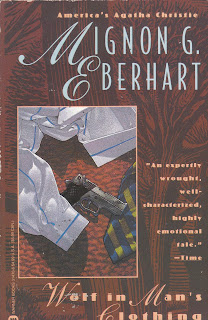 Nurses Sarah Keate and Drue Cable arrive at the Brent's Berkshire estate on a blustery February afternoon to care for Craig Brent, who has had a strange shooting accident.  But before the day is out Conrad Brent, their patient's wealthy father, lies dead and Drue is the prime suspect in a murder she had every reason to commit.

Sarah has no inkling that Drue and Craig had once been married... that Conrad Brent had intervened to end his son's marriage... that Drue had come with a purpose of her own.  Now, Drue is surrounded by Conrad's young wife, Alexia, pretty as a Borgia portrait; Nicky, her handsome twin brother; Dr. Chivery; his mysterious wife, Maud; and the estate staff.  She has returned to a house where she is hated.  And Sarah, fiercely protective of her young friend, sifts through a maze of secrets to pinpoint a scheming killer poise to strike again.

I had never heard of Mignon Eberhart until her name came up on the Mystery Board of the Barnes & Noble Book Forums.  I know I'm blindly unaware of most of the American Golden Age mystery writers, but it seems rather pathetic that there are so many prolific authors out there, I never heard of.  It's one of the many reason I'm so glad that Becke, who moderates the board, decided to feature a classic American mystery author every month.

Now I'm not sure where Wolf in Man's Clothing fits into the Sarah Keate series, but I don't really think I missed out on anything having read it out of order.  What I'm finding rather fascinating though is this notion that nurses make great amateur detectives.  Just in this year alone, Nurse Keate is the third such character I've come across.  First there was Hilda Adams, the Miss Pinkerton of the Mary Roberts Rinehart books, then there was Bess Crawford, the creation of Charles Todd.  I haven't done the research on it, but I bet I could find a ton more examples.  I don't know if it's the idea that a home nurse is able to see, do, and hear things that a more traditional detective would not be able to, but it's an interesting notion.  It seems to make the case a bit more personal when you have someone in the home doing the sleuthing.

No unlike Bess Crawford, who seems to get her hands a bit dirtier, Sarah Keate reminds me more of Hilda Adams.  They both tend to keep their eyes open and their ears working overtime, taking in everything around them.  Most of the detective work is left up to the professionals, but if it wasn't for them, those professionals would probably never be able to put everything to together.  Now, Hilda Adams is a bit more hands on that Nurse Keate, getting herself into tighter pickles at times, but Sarah Keate is no wallflower.  She has no problem poking her nose in, saying what's on her mind, or prying into the secrets that the Brent family are trying to hide.

As far as the mystery goes, I found it to be interesting, if not compelling.  It held my interest, and contained enough twists and turns to make my head spin once or twice, which is a good thing in my book.  The side stories did tend to mislead me a few times, but overall I think they were an interesting touch that allowed the head spinning I love so much.  I have one more of her books to read, and if I like it as much as I did this one, I'm sure that Mignon Eberhart will quickly become a new favorite.

Challenges: A-Z, VM (Occupational Hazards)
Posted by Ryan at 12:00 AM

I haven't read this one yet. My favorite Eberhart with Nurse Keate is Mystery of Hungting's End. That's on deck for 2013 as my "Reread an old Favorite" for the Vintage Challenge.

I have never heard of this author, but I like the idea of nurses being "detectives." I have the Bess Crawford books 1 and 2 to someday listen to on audio. I hope the next book from this author is another great read for you!