The Woman in Black by Susan Hill 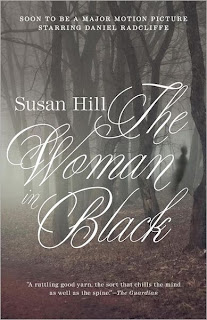 Arthur Kipps is an up-an-coming London solicitor who is sent to Crythin Gifford - a faraway town in the windswept salt marshes beyond Nine Lives Causeway - to attend the funeral and settle the affairs of a client, Mrs. Alice Drablow of Eel Marsh House.  Mrs. Drablow's house stands at the end of the causeway, wreathed in fog and mystery, but Kipps is unaware of the tragic secrets that lie hidden behind its sheltered windows.  The routine business trip he anticipated quickly takes a horrifying turn when he finds himself haunted by a series of mysterious sounds and images - a rocking chair in a deserted nursery, the eerie sound of a pony and trap, a child's scream in the fog, and, most terrifying of all, a ghostly woman dressed all in black.

Before the movie version of The Woman in Black came out, I think the book was one that had been on my radar for a while, but nothing I was in a hurry to get to.  Then I saw the first trailer for the movie, and a fire seemed to be lit under my ass.  I was confident that I would not only see the movie while it was in the theater, but I would read the book first.  Nothing would get in my way... then life happened.  Not only did I wait for the movie to come out on DVD before I saw it, but I read the book a few months later.  I think after this one, I'm going to stick to that order of things.

When I finally sat down to watch the movie, I wasn't sure what to expect.  I knew that the story involved the ghost of a woman dressed all in black, that she caused the death of children, and that Daniel Radcliffe was playing a lawyer.  I was hoping for something overly Gothic and atmospheric, for the most part, the movie delivered.  While I thought a lot of the melodrama was over the top, the body count way too high, and a ending that just didn't sit right with me, I was entertained for the most part.  The cinematography was gorgeous and the setting couldn't have fit the bill any better.  I was even impressed with Mr. Radcliffe's acting.  Had I read the book first, I have a feeling every issue I had with the movie would have been compounded in my head.  I think it's even safe to assume I may have been disappointed in the way Hollywood can take a well crafted story and turn it into something else.

Where the movie was overly done in it's violence and drama, the book is understated and simple in its construction.  Everything I had a problem with in the movie, seemed to be fixed in the book.  There wasn't the huge body count of murdered children to account for, including the three who jump out the window in the beginning of the movie.  There was no melodramatic "rescue" of the young boy who's death started the whole sad story to begin with, and the end, which I hated in the movie, was so radically different that I couldn't help but be impressed.  Of course I knew the ending would be different by the way in which the narrator starts off the book.

It's Christmas Eve at Monk's Piece, the home of Arthur Kipps, his wife, and his four stepchildren.  Arthur is a haunted man, whose past is filled with a tragedy he has never shared with his family over the last fourteen years.  He has tried to rebuild his life and create a semblance of normalcy and joy, and for the most part he has.  When he comes inside that Christmas Eve night, it's to find his family telling ghost stories around the fireplace.  When he is called upon to share a tale, he is disturbed in a way his family has never seen him, he storms out and refuses to participate.  He is able to explain his behavior away, but it serves as the catalyst for him to sit down and tell his tale.

It's a story he has never shared, doesn't want to share, and won't share until after his death.  What he sits down to write, it's a tale of unending loss, pain, and heartache.  It's the story of a woman, forced to give up her child and to have that child's life taken away all too early.  It's a story of revenge, death, and despair so black, the pain doesn't end at the grave.  It rises up and strikes down those closest to the men and women who are unfortunate enough to encounter the sad woman in black.  But most of all, it's the story Arthur Kipps never wanted to share, the story of how he lost his first family, of how the woman in black took everything he cared about away from him, and forced him to rebuild his life out of the ashes.

It sounds like the book was better than the movie, as usual.

Sounds like the book was much better than the movie! Like Kathy pointed out, that's nothing new. :)

You know I was never to sure if I wanted to watch the movie. But the book sounds much better than the movie looked to me. Glad you enjoy reading it. :)

Hope you are doing well, friend. :) Take care! And don't let the holidays wear you out at work.

I love the book! I haven't seen the Radcliffe version (not sure I will after what you say). I did see a play production of it a few years ago that got the atmosphere exactly right.

I am not much for this type of book, but you make it sound like something i could get myself into. :)