The Dragon Reborn by Robert Jordan 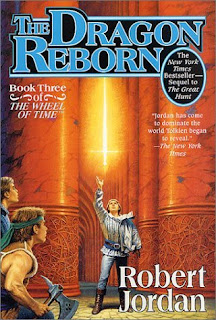 The Dragon Reborn - the leader long prophesied who will save the world but in the saving, destroy it; the savior who will run mad and kill all those dearest to him - is on the run from his destiny.

Able to touch the One Power but unable to control it, and with no one to teach him how - for no man has done it in three thousand years - Rand al'Thor know only that he must face the Dark One.  But how?

Winter has stopped the war - almost - yet men are dying, calling out for the Dragon.  But where is he?

Perrin Aybara is in pursuit with Moiraine Sedai, her Warder Lan, and Loial the Ogier.  Bedeviled by dreams, Perrin is grappling with another deadly problem - how is he to escape the loss of his humanity?

Egwene, Elayne, and Nynaeve are approaching Tar Valon, where Matt will be Healed - if he lives until they arrive.  But who will tell the Amyrlin their news - that the Black Ajah, long thought only a hideous rumor, is all too real?  They cannot know that in Tar Valon far worse awaits...

Ahead, for all of them, in the Heart of the Stone, lies the next great test of the Dragon Reborn...

I enjoy this book, but it's not my favorite of the series.  Most of the book is focused on Mat as he is healing from the separation from the dagger, the girls hunting for the Black Ajah, and Rand's acceptance of who he is and the taking of Tear.

We get an introduction to the Aiel, and it's obvious from the start that Rand's story is going to continue to develop with the Aiel.  There is too much foreshadowing of how Rand looks like an Aiel, for his back story to go in any other direction.  At this point, the Aiel seem to be a little one dimensional, but I know that in the upcoming books that we are going to get a better look at them.

The development of the Black Ajah, and the tentacles they have throughout the White Tower is one that I find fascinating and boring at the same time.  I really don't care who the individual members are, though I'm surprised by some that are found out later on in the series.  I'm more interested in how they are being manipulated by The Forsaken, and the damage they do to our heroes.

I like the glimpses of Perrin we get in this book, though I wish we would have had more of him.  Speaking of Perrin, this is where we meet Faile, and at this point in time, I can't stand the girl.  I know my feelings of her change later on in the series, so I'll be curious to see if I still end up liking her in the end.

At this point in time, this is the last book I've read in my rereading bonanza, and I'm not sure when I'll get to the fourth book.  I'm hoping soon, but knowing me, I'm not going to be holding my breath.

The Eye of the World
The Great Hunt

Hmmm ... I'm wondering if I should start looking for this series .. so many great books ... so little time ... I'm thinking the fourth should be great .. there's always one in the series that's sort of ho-hum

I hope that you will get to the next soon :D Considering that the countdown clock is ticking