The Case of the Perjured Parrot by Erle Stanley Gardner 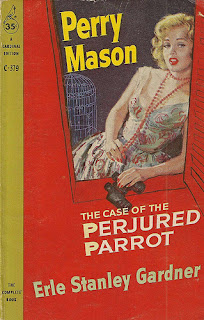 Did the wealthy Fremont C. Sabin divorce his wife before his untimely death?  That's the multimillion-dollar question.  And the right answer will mean a windfall for either the dead man's angry son or headstrong widow.  Each has accused the other of destroying Sabin's will and murdering Sabin.  But with no document declaring who the affable eccentric intended to leave his fortune to, Perry Mason faces a particularly prickly puzzle.

Even more puzzling, however, is the talking parrot.  Casanova was Fremont Sabin's beloved pet.  But the bird found at the crime scene proves to be a foul-mouthed impostor.  Suffice it to say that more than a few feathers will be ruffled as Mason sets out to clip a clever killer's wings....

As The Breaking Point was my last Mary Roberts Rinehart book of the year, The Case of the Perjured Parrot is my last Erle Stanley Gardner book of the year.  Which means, for now, it's time to bid a farewell to Perry Mason.  Hopefully he will be around next year as well, but if not, I will have this and the other books I have read over the last two years, to console me.

Little know fact about me, I hate birds.  I'm not talking about loons, swans, eagles, falcons, or even ducks; you know the kind that stay outside, living their lives without much thought of when a human owner is going to feed them.  What I can't stand are the birds that live inside the home; canaries, parrots, parakeets, or cockatoos.  I think they are dirty, loud, obnoxious creatures, and I don't understand their appeal.  My aversion to them is so great, that if this wasn't a Perry Mason book, I'm not sure I would have picked it up.  By the way, I never said I was completely rational.

Because this is a Perry Mason book, I couldn't wait to dive in.  There is something so raw and refined about Perry Mason, that I find the contrast to be rather appealing, especially on the page.  The TV show version, though Raymond Burr did a great job, is just a little softer.  Personally, I prefer the harder edge version, though they are both wonderful.

With The Case of the Perjured Parrot, Perry is confronted with a rather baffling case.  First, he needs to figure out who Sabin's heir actually is, though the timeline of the divorce throws him off track for a day or two.  Secondly, he is confronted with another timeline that just doesn't seem to add up.  The timeline the police is offering off for when Sabin was killed, has holes in it the size of a bull elephant.  It's up to Perry to figure out what really happened, and maybe who the killer is.  Then there is the issue of the second wife, who Sabin seems to have married in Mexico.  If a wife is going to inherit, which one should it be.  It's when that second wife is accused of the murder, that things really start to get sticky.

The parrot, Casanova, is part of that stickiness.  It keeps repeating a line begging Helen not to shoot.  The problem is, the two wives, share the same name, Helen.  Add in the fact that the substitute for the substitute parrot is found headless, and poor Casanova may be in real danger.  I may not like parrots, but I'm pretty sure I would never behead one.  Through some dirty tricks and legal maneuvering, Perry not only proves the innocence of his client, but unmasked the real killer, and reunites a newlywed couple.

For anyone interested, I found the TV episode on Bing.  I couldn't figure out how to embed it, not sure that was even possible.  But if you click on the link, it will take you there.

Challenges: VM (Cherchez le Homme)
Posted by Ryan at 12:00 AM

I used to love the tv show..and the mysteries sound like they would be quick, fun reads.

Vintage cover that is truly wonderful!! I'm so glad that you enjoy these books and bring them to our attention. Now, your aversion to inside birds is a little bit strange but I get it!!

Does anyone know how long the parrot lived in real life? I know they live many years in the wild. I always search the actors in the episodes to see which ones are still alive and what became of them. It's very interesting. Just wondered about the part if anyone knows. :-)