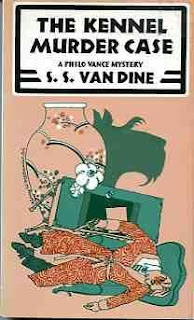 When the corpse of Chinese art collector Archer Coe is found, gun in hand, in a room whose only door is bolted from the inside, the authorities assume they're discovered a suicide.  But after considering the bizarre clues the locked room offers - including a wounded scottie and a blood stained fragment of a Oriental vase- Philo Vance can only conclude that Coe was murdered.  With his usual skills, Vance sets about solving a series of peculiarly gruesome killings that rock the elegant New York art world of the early 1930s.

After reading The Greene Murder Case earlier in the year, this book was pretty close to languishing on the shelves for all eternity.  The only reason I picked it up was that I needed two more books by male authors for my Vintage Mystery Challenge that Bev of My Reader's Block is hosting.  It isn't often that I have so a strong negative reaction to a book, that it makes me want to never read any other book by an author.  I don't want to say I hated The Greene Murder Case, but if I didn't, I was pretty close to that.

I'm not going to say that I felt the same way about The Kennel Murder Case, because I didn't.  I'm not sure what the difference is, but the smugness and superiority that Philo Vance showed in the previous book, seemed to be toned down a bit in this one.  He was still a know it all, who seemed to have an answer for everything.  He still comes across as a pompous, smug rich guy, who for whatever reason, knows every little detail, on every single subject know to man.  The author still inserts himself as a character in the book, and even includes scholarly footnotes as a way to ground a fictional book into reality.  Even with all that irritation, I didn't find myself wanting to chuck the book into the trash can the way I wanted to do earlier in the year.

Part of it may be the fact that the side characters were a bit more interesting, than the previous book.  We have the victim's brother, who is found stabbed to death in a downstairs closet.  There is the niece who felt as if her whole life was being controlled by Archer Coe.  Then there is the next door neighbor, who was wooing the niece, a man Archer didn't think was good enough for her.  Add in the Italian museum curator, a Chinese cook, and a D.A. who seems to share some of my annoyance of Philo, and the cast is pretty well set.  One of them killed the two Coe brothers, rigged a room to make it look like a suicide, and took a fireplace poker to a scottie.  I'm pretty sure the Coe brothers probably got what they deserved, but the poor dog didn't.  And it's that dog, along with a doberman pincher, who makes sure that justice is done, and the killer is punished.

Overall, while I can't say I liked the book, I am willing to say I enjoyed it, well a little anyway.  I'm not sure I will ever be able to forgive the author's style and ego, but I am glad that I didn't leave this book feeling the way I did earlier this year.  I do think I'll always prefer the movie versions of Philo Vance, over the written.  It's the movie version of this book, starring William Powell, that actually got me hooked on the idea of reading these books.  I guess, with only one more book to do, that I better start finding the movies on DVD.

I felt the same way about the Phil Vance books - well, I've read only one. But I can't fathom why they were so popular in their day unless it was because people didn't have the opportunity to pick up arcane knowledge or trivia the way we do today.

Truly you find the most interesting books to read! :)

Wow; usually the book is better than the movie! :) Great honest review!