The Corpse With the Eerie Eye by R.A.J. Walling 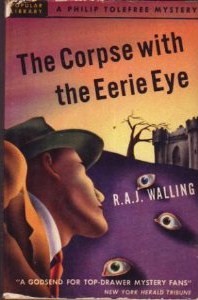 When a young man starts to realize there is something amiss within his fiance's family, he's at a loss.  He feels her slipping away from him, but doesn't quite know the reason.  On the advice of someone he trusts, he calls in the detective, Philip Tolefree, for help.  At first all Tolefree senses is a general unease around the family.  When a newcomer to town is found brutally murdered, he can't help but connect the two situations.  When, after the murder, the family seems to be once again at ease, Tolefree is convinced they are connected.  It's up to him to figure out what's going on, or the young man he has come to like, may be marrying into a very dangerous family.

Wow, I can't believe this will be my last mystery review of the year.  I only have three more reviews to write, and they are high fantasy books.  And we all know how much I enjoy writing those reviews.  I already have some great vintage mysteries lined up for the new year, I just need to keep myself from getting started on them too early.

Before I picked this book up, I didn't not realize it was part of a series, let alone it was one of the last books to feature Philip Tolefree.  Philip, much like a few other British detectives, doesn't seem to be all that interested in the common folk.  He seems to be a private detective that hobnobs with the rich, walks the halls of manor homes, and knows which silverware to use.  When he is asked to delve into the private dealings of a very wealthy family, he is met with roadblocks at every turn.  While everyone is polite to his face, engages him in conversation, and like the guy, they aren't willing to have him nose around in what could be embarrassing family secrets.  Not used to such behavior, Philip is ready to wash his hands of the whole thing.  The only thing that keeps him on the case is his admiration for the young man who hired him, and the inner strength he sees in the young couple.

When a man that nobody seems to have liked is found dead, laying on an isolated moor, Philip suspects that everyone around him knows what happened, but aren't willing to fill in the details.  It's all about keeping the family safe and protected from a scandal.  It's only through some brilliant thinking, and quite a bit of luck, that Philip is able to piece the whole sorry plight together.  The fact that he solves the murder case, makes sure the young couple marry, and does it all without the family secrets coming to light, makes me like the guy even more.  He may be a upper crust snob, but he has tact and sympathy, both of which many detectives are lacking.

A new author and series for me. Thanks for the post.

I've never heard of this series. I'll have to add it to my list.

Sounds good, Ryan! And an author/series that I haven't come across before. She says as she scurries to add to her TBR pile...

Does this mean you've finished the Vintage Mystery Challenge? It must! Woo Hoo!

Not usually a mystery fan, but I really like the sound of this one. Curious about what the family secret is! Great review!