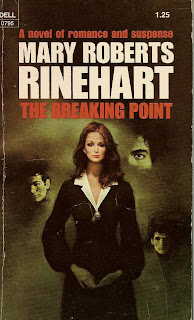 Even as Dr. Dick Livingstone took Elizabeth in his powerful arms, she felt a shiver of doubt, of dread, run through her young body.

Was the man who pressed her to him the Dick Livingstone whom she thought she knew - kind, gentle, dedicated, loving?

Or was he the man who she had glimpsed when his make had seemed to drop - vicious, ruthless, savage, burdened with guilt, and fearful of discovery?

Elizabeth did not know.  She only knew that now she was in this man's total power - for God-given good or diabolical evil....

My last Mary Roberts Rinehart book of the year, and while it may not be what many would consider a true mystery, I couldn't be happier with ending the year on such a high note.  Much like The Street of Seven Stars, The Breaking Point is more of a Gothic like romance, with a tinge more mystery than would normally be suspected.  Once again, and I should have know better by now, I wasn't expecting the focus to be on the personal relationships so much, but I didn't care.  Mary Roberts Rinehart is so brilliant at creating characters and relationships between them, that I would be willing to read just about anything by her.  At this point in time, if I come across a straight out, full blown romance book that she wrote, I would jump right in, no doubts clouding my mind.

As usual, the synopsis from the back cover is a little misleading, both in tone and in point of view.  Instead of focusing on Elizabeth, the book mainly focuses on Dick, a young reporter trying to garner the truth, and various other characters as they come in and out of the story.  We do hear Elizabeth's voice from time to time, but most of the story is taken over by Dick as he tries to restore his past.  It's a past he doesn't remember, but one he feels he needs to know about in order to move on with his life, a life he wants with Elizabeth.

Now I don't want you to get the impression that there isn't a mystery here, because there is.  Dick Livingstone doesn't remember anything about his past.  Other than for the last ten or so years, in which he went to war, medical school, and now practicing medicine with his uncle and aunt in a small town, he knows nothing about his life.  He's been told a few things by David, the aforementioned uncle, but he doesn't really remember them.  It's that lack of knowledge that keeps him from moving on with his life, especially once he realizes Elizabeth feels the same way about him.

What he doesn't know is that he is about to open up a whole can of worms.  He doesn't know that his past includes a torrid affair with an up and coming actress, a vast inheritance which he drank and partied up, a murder, and a drunken escape into snow covered mountains.  From that moment on, every trace of who Dick Livingstone was before vanished, most thought he was dead.  It's only when he goes back to uncover the truth, that the horror of his past finally catches up with him.

Now it's up to Dick, David, the young reporter, and a few other friends to piece together the truth and finally put the past to rest.  Hopefully it won't be too late for Elizabeth or those left behind.  Of course, since this is a Gothic romance, I'm sure he can figure out what happens in the end.

You must be her number one fan! I really do want to try one of her books.

I read The Circular Staircase this year and loved it so much! I just went and download this book and the other one you mentioned because I've been trying to figure out which of her books to read next. I can't wait to read them now!!!

The Street of Seven Stars kind of lost me (not enough mystery), but I have this on audiobook, so I'll get to it eventually. The book synopsis is hilarious.