Naughty In Nice by Rhys Bowen 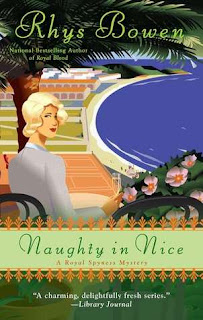 Royalty has its privileges, even when you're thirty-fourth in line to the throne, as Lady Georgiana Rannoch discovers on the glamorous - and dangerous - French Riviera...

Why should my clueless brother, Binky, and he decidedly disagreeable wife, Fig, be the only ones to enjoy the fun and sun of the French Riviera?  Thankfully, her Majesty the Queen has once again come to my rescue.  She is sending me off to Nice with a secret assignment - to recover her priceless stolen snuffbox from the disreputable Sir Toby Groper.

Having Her Majesty's trust is an honor, but an even greater honor is bestowed upon me in Nice - none other than Coco Chanel herself asks me to model her latest fashions.  Unfortunately, things go disastrously wrong on the catwalk, and before I can snatch the snuffbox, someones life is snuffed out in a very dastardly way.  With a murderer on the loose - and my dearest Darcy seen in the company of another woman - how's a girl to find and time to go to the casino?

Book number 5, and I'm still in love with Georgie,her mother, Darcy, Belinda, and all the rest of them.  As you know, I'm a huge mystery fan, but I've never been one into the "cozy" classification of mysteries all that much.  I find most of them to be rather predictable and full of stock characters that could easily pass back and forth between authors.  But there is something so fun and lively about Georgie, that I can't help but keep coming back for more.

Poor Georgie, despite the royal blood flowing through her veins, she is young woman who just doesn't have any money.  She isn't allowed to have a job like a "commoner" could, so she can't make money.  Her, long deceased, father squandered the family fortune years ago, so there is no money coming from that direction.  Her brother's wife, holds the purse strings tightly, and doesn't allow Georgie much in the way of expenses.  So she has been forced to make for herself, the best she can.  Luckily for her, she is surrounded by those that love her, and if they can't help her financially, they keep her spirits up.

When the Queen sends her to the Riviera to find her missing antique, she has no clue where she will stay, or how she will pull it off.  Through some rather lucky breaks, she finds herself standing on the porch of her mother's villa, who she didn't even know was going to be in France at the time.  So with the place to stay settled, she does her best to figure a way to get into Sir Toby Groper's good graces.  And once again, providence strikes, for her mother's villa just happens to sit right above Sir Toby's.

Of course this wouldn't be Georgie's life in everything didn't go wrong, and uproariously so.  At one point in time she is forced to jump off a yacht, only to be rescued by a dashing nobleman who may not be all he seems to be.  She has a pricelss necklace, owened by the Queen, stolen off her neck, and her quarry, Sir Toby Groper, is found floating in his swimming pool, very much dead.  Add in a family relation she never knew she had, the truth behind Darcy's other woman, and enough sass and wit to cover all her bases, and Georgie is once again in the middle of a grand adventure.
Posted by Ryan at 12:00 AM

I love this series! I have only read the first book but look forward to moving forward in the series!

This sounds like a delightful series - I may have to pick up the first book as a gift for my mom.

Enjoyed your review! I love your enthusiasm for these mysteries so much that I may have to try them myself!