So yesterday was the first day it was actually cold, I think the overnight lows went to around 19 degrees.  Sadly, it's not going to last for very long, as it's supposed to be back in the 50s within the next few days.  This warmer weather is really putting a dampener on my Christmas cheer.  It's just not Christmas without the cold.  I've gotten used to not having a white Christmas, I'm not sure I can handle Christmas in the 50s.  So it's a good thing that this month's FFC posts are featuring characters that scream cold, snow, sleet, and blizzards.  Now if I could only get this song to come true, I'd be a much happier boy.

Since I'm not going to be getting my way, again, I will have to settle for the movie.  Of course I could always make a deal with Snow Miser to send some of his winter air down my way, but I have a feeling his brother, Heat Miser, isn't going to allow that this year. 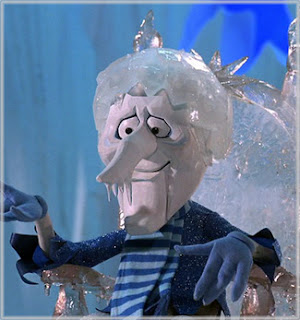 In The Year Without a Santa Claus, Santa is in a funk.  He no longer feels that children believe in him, and it's leaving him in a rather bad funk.  It's gotten to the point where Santa has stressed out so much, it's made him sick.  So instead of doing his usual routine, Santa decides to skip Christmas that year.  Well as you can imagine the denizens of the North Pole are all in a tizzy over the news, two elves, Jingle and Jangle decided to fix things once and for all.  They take it upon themselves to search for children who do believe in Santa Claus and in the small southern town of Southtown, they think they have found it.

Of course, nothing can be that easy.  You see they brought along a young reindeer named, Vixen, who got picked up by the pound as a stray dog.  Now Jingle and Jangle, along with a young friend they made, try to get Vixen out, but it's a no go.  They try to explain the mission to the Mayor, but the Mayor just scoffs.  He tells them that if Santa Claus is real, then Southtown will have a white Christmas that year.  Well as you know, the southern United States rarely gets snow, so it's up to Mrs. Claus to make things happen.  And that is where our friend, Snow Miser, comes into the picture.

You see, Snow Miser is the guy to see if you need a good strong winter wind, a slight dusting of snow, an ice storm, or even a blizzard.  And at first, he's all for helping out Mrs. Claus, until he learns where the town is at.  Southtown lays within the boundaries of his brother's domain, and Heat Miser doesn't like to share.  Now I won't get into too many details on how they work it all out, but Snowie (as Mrs. Clause calls him) gets the job done and Christmas is saved.  Now I just need Snow Miser to get started on central Kansas.  I'm not going to give up on a white Christmas just yet.

I do not think I have ever seen that one

I'm not familiar with Snow Miser. We haven't really had cold weather yet but everyone around here was whining because it only got up to 58 yesterday.

I LOVED this film growing up. My dad recorded it on VHS one year, and we watched it year-round. Snow miser! The singing! Santa with the sniffles! Thanks for bringing back the memories...

Loved the Miser brothers and that was one of my fave songs for the season. Yea, I'm a bit strange. :)

Love this character and thanks for making me hum this tune for the next few weeks!!

How the heck did I miss this one? The Snow Miser sounds awesome! Thanks Ryan! Hope you get your cold Christmas!