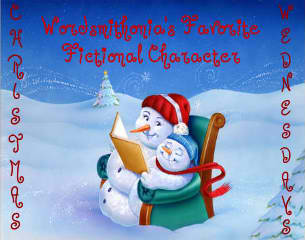 It's Christmas!  Well almost anyway, either way, Christmas is on the way and I for one can't wait for it.  There is something so magical about Christmas that it makes the entire month of December come alive for me.  I will be busy watching my favorite Christmas movies (with or without my son), we will go look at Christmas lights, listen to Christmas music, cook up a storm, and enjoy the time we have to spend together.  I have a sneaky suspicion that we aren't going to have a lot of cold weather this year, let alone snow, so I'm going to have to interject those two things into my life as much as I can.  So I think for this month, I'm going to focus on my Favorite Fictional Characters that bring the snow, cold, ice, and fun into my life every year.  So for now, I'll leave you with this song, once it's done, please reacquaint yourself with Jack Frost.

Hopefully that song put you into the mood for a little cooler weather, the type of weather that is impossible to have without our hero, Jack Frost.  Now I know he appears in various incarnations throughout the movies, books, and other forms of media, but the version I want to focus on today is the Rankin & Bass version.  Now you may be thinking, wait a minute, they have two different versions of the character, and you would be right.  There is the Jack Frost that appears in Frosty the Snowman, who as much as I love him (he is my current Facebook profile pic), he doesn't have his own back story.  So for the purposes of this post, we are going to focus on the Jack Frost that appears in his own Christmas special, which first aired in 1979. 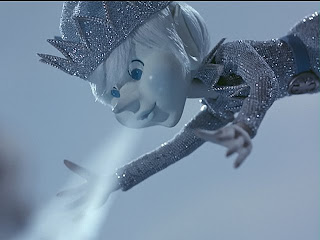 Jack Frost is an immortal winter sprite, and not just any sprite at that.  His special task is to usher in the cooler winds that usher in winter, bringing snow to the world.  He works closely with his boss, Father Winter, as well as two other sprites, Snip the snowflake maker and Holly, the holiday snow gypsy.  He has lived a contented life until one winter day, he spies on a mortal girl called Elisa.  He saves her from a terrible accident and falls in love with her during the process, and he takes an expression she says to mean the same thing.  He runs to Father Winter and begs him to become human in order to win the mortal girl.  Father Winter eventually agrees but gives Jack some conditions to work with.  Jack must prove he can succeed as a human.  He has to earn a house, a horse, a bag of gold, and a wife by the first sign of spring.  If Jack can't do that, he must become a sprite again.

With the help of Snip and Holy, who also take on human guise, Jack opens up a tailor shop in January Junction, the hometown of Elisa.  He makes the acquaintance of the young lady and her family, but he quickly realizes that Elisa has her sights set on another man, Sir Raveneau.  Determined to win the day, Jack works at being human.

When Elisa is kidnapped by the evil Cossack King, Kubla Kraus, it's Sir Raveneau who saves her, not Jack.  Kubla Kraus is so angry though that he vows to destroy January Junction and imprisons Jack, Snip, and Holy who were attempting to rescue Elisa on their own.  Jack, out of fear for the town, makes the decision to become a sprite again and calls up a winter storm, freezing Kubla Kraus and his clockwork army in a avalanche of snow.

Poor Jack though has to stay there to make sure the freeze sticks and with Groundhog Day fast approaching, it doesn't look like he will be able to succeed in being human.  He scares the Groundhog with his shadow, buying a little more time, but when that time runs out, he forced to take drastic action.  With only a few minutes to go before spring has to start, Jack uses some trickery to destroy Kubla Kraus' army and send him far, far away.  Sadly, in the time he spent away, Elisa and Sir Raveneau have cemented their affections for eachother.  Jack, who can never be angry, blesses the union in his own special way, and goes back home with his friends.  As Snip said, winter would just not be the same without him.

I loved that special. One of my faves!

I like Christmas, but Jack Frost and his cold weather can stay away!!

As a kid we lived for this time of year and the CBS Christmas special shows. I loved this character too!

I love this story. I never knew the story prior to now. Beautiful!
Angie