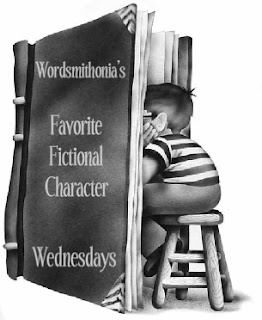 Only one more week before we start talking about some of my favorite characters that remind me of Halloween.  After Christmas, Halloween is the time of year that I love the most.  I love horror movies and almost everything associated with the holiday, so I'm looking forward to the characters that I'll be presenting to you during October.  For today's post, I'm revisiting my favorite TV show of all time.  I haven't posted a character from Buffy: The Vampire Slayer, or Angel for that matter, in over a year.  I actually a bit amazed by my blatant disrespect for some of the greatest characters to ever grace the silver screen.  I could even do an entire year of characters, just from those two shows.  But today, I want to quickly talk about my favorite demon, Anya Jenkins. 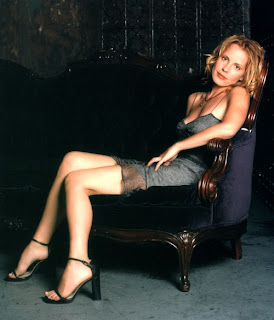 The woman we would all come to call Anya, was born Aud in a 9th century Scandinavian village.  She wasn't well liked by her fellow villagers and quickly became an outcast.  She raised rabbits, more on the bunny thing later, but never sold them.  She would rather give them out as gifts, which makes Aud sound like a kind hearted, generous soul. Well appearances can be deceiving, and how they were with her.  When men disappointed her, she did horrible things to them.  She caused one man to have boils on his, well I'm sure you can guess.  Her biggest accomplishment, and then one that would change her life forever, was turning a cheat boyfriend into a troll.  Now boys, let this serve as a lesson to you.  Unless you want to spend eternity as a Shrek wannabe, don't cheat.

That last act of revenge attracted the attention of D'Hoffryn, a demon who showers Aud with praise for her hellish acts of vengeance.  He offers her the chance to become a vengeance demon, and poor Aud agrees to it.  D'Hoffryn renames her Anyanka, Patron Saint of the Women Scorned.  Anyanka spends the next 1000 plus years creating havoc on the behalf of desperate women everywhere.  Here time is spent, from a demon's point of view, wisely. She comes up with more and more elaborate ways of granting the wishes of the scorned upon the men who so wronged them.  She turns one into a giant worm, another into a demon who is sent to Hell to suffer for all eternity.

We don't meet this goddess of retribution until Cordelia catches Xander and Willow kissing.  A distraught Cordy, who can't imagine any man would ever cheat on her, is in such pain that Anyanka can't resist the summons.  When she gets Cordy to make a wish, all hell breaks lose.  Cordy blamed everything on Buffy, without Buffy coming to town, Cordy would never have stooped so low as to date Xander.  Cordy wishes that Buffy never came to Sunnydale, a wish that Anyanka grants happily.  Of course it leads to the vampires taking over, Xander and Willow turned into vampires, and pretty much everyone else dead.  Giles, with some helps, figures out that this isn't the world that was supposed to be, and breaks Anyanka's spell.  This didn't end well for Anyanka, as the amulet that gave her power, was destroyed.  It made her mortal.

Over the next few years we get to know Anya, who happens to be one of the most complex characters Joss Whedon ever created.  Anya, who has spent over a thousand years as a demon, has no clue on how to live as mortal.  Because of that, she tends to say exactly what she is thinking.  The showed played that aspect of her personality for all it was worth.  Often times it would get her into trouble with the others, but mainly because she was saying something the others were hesitant to.  She was the voice of reason, that they all wanted to ignore.  It also made her look at relationships in a way that was unique to her.

Almost from the get go, she develops a thing for Xander, even though at first it makes her want to vomit.  She has spent so long hating men, that finding herself interested in one, just doesn't make sense.  For years the two of them go back and forth, almost getting married.  It was an interesting relationship to watch develop over the course of a few seasons.  The dynamic between them was amazing.  Xander made Anya more human, and likable to the others.  Anya kept Xander grounded and forced him to grow up.  Though they weren't together at the end, their friendship was solid and something they both cherished.

Now Anya wasn't a perfect "human", she made huge mistakes and was oftentimes selfish.  When she was hurt, she would lash out, and even reverted back to her vengeance demon days.  But underneath the shell, was a fiercely loyal young woman who valued love and commitment more than anyone else on the show.  She had a strange way of showing it most of the times, but I almost think she was the most human of all the characters.  Where she developed the phobia to rabbits is beyond, me, but it was funny to watch her aversion to a creature she once raised so lovingly.

When the end came, she met it with courage and bravery.  She was the only one of the core group to not eventually survive the final showdown, but she went down fighting.  Her loyalty to her friends and her love, mainly for Xander, forced her to be fully human once and for all.

I tried to watch Buffy one time... and shockingly I just didn't get into it. Maybe I should attempt it again. Sometimes I try to watch things when I am not in the mood and that does no good. I enjoy Supernatural so I am sure this is right up my alley!

I remember that my father used to watch Buffy (and Xena!) but I was never into it. I tried watching the first episode sometime this past year but it didn't really grab me. Though I've never really been into fantasy shows or movies, despite how much I enjoy reading genre books.

I love Anya! I remember watching an interview with the actress (Emma...? I can't remember now) and she said that she asked for Anya to be killed in the final episode. She said that Anya had lived long enough.