On a Farther Shore by Rachel Carson (Plus Giveaway) 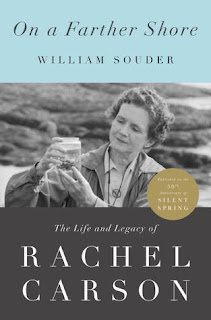 She loved the ocean and wrote three books about its mysteries, including the international bestseller The Sea Around Us.  But it was her fourth book, Silent Spring, that this unassuming biologist transformed our relationship with the natural world.

Rachel Carson began work on Silent Spring in the lats 1950s, when a dizzying array of synthetic pesticides had come into use.  Leading this chemical onslaught was the insecticide DDT, whose inventor had won a Nobel Prize for its discovery.  Effective against crop pests as well as insects that transmitted human diseases such as typhus and malaria, DDT had at first appeared safe.  But as its use expanded, alarming reports surfaced of collateral damage to fish, birds, and other wildlife.  Silent Spring was a chilling indictment of DDT and its effects, which were lasting, widespread, and lethal.

Published in 1962, Silent Spring shocked the public and forced the government to take action - despite a withering attack on Carson from the chemicals industry.  The book awakened the world to the heedless contamination of the environment and eventually led to the establishment of the EPA and to the banning of DDT and a host of related pesticides.  By drawing frightening parallels between chemicals and the then-pervasive fallout form nuclear testing, Caron opened a fault line between the gentle ideal of conservation and the more urgent, new concepts of environmentalism.

I don't know how everyone else does it, but I don't seem to have any consistent method of choosing which review requests to accept, and which I decline.  I have, on a few different occasions, attempted to come up with a "scientific" apparatus to make those decisions for me, but I tend to throw those misguided attempts right out the window.  Instead I tend to pick my review books based on if the subject/premise interests me or if I have an emotional reaction to the idea of reading the book.  I'm hoping that's how most of you do it, but if not, I'm going to feel out of the loop.  For the most part, with some serious exceptions, this process has worked for me.  With On a Father Shore, the idea of choosing a review request based on an emotional impulse, has me thinking I have the perfect system in place.

To tell you the truth, this wasn't a book I picked up as soon as I got it.  I seemed to be going through a reading slump at the time and I just couldn't get all that interested in anything I had agreed to review.  A few days later I finally picked it up and read about the first chapter and a half and then put the book back down and forgot about it.  It's not that I didn't like what I was reading, it was more of that feeling we all get when we have read too many review books in a row.  Then on a Tuesday morning, September 4th to be exact, I happened to be listening to The Diane Rehm Show on NPR, go figure, and she was interviewing William Souder, the author of On a Farther Shore.  I couldn't quit listening to the interview, which I found to be informative and emotionally (there is that word again) compelling.  It was just the catalyst I needed to pick the book back up and delve into the life of Rachel Carson.

I have not had the opportunity to read the author's previous two books, but I would have to assume that they are as engaging as this one.  There is a gentleness to the narrative that if found to be the perfect way to Rachel Carson's story.  I'm not sure if that is his normal tone in writing a book, or if it was in response to his subject.  I'm not sure gentle is the right word to use here, but whatever the sentiment I'm trying to convey, it seems like an apt description to explain the the subject of this book.

On a Farther Shore is one of those books that I would find hard to shelf in a bookstore.  It's a combination of biography, history, science, and public policy.  It would feel at home in any of those sections, and I'm almost sure Rachel Carson would make sure it was shelved in all those sections.  Mr Souder does a masterful job of not only detailing the life of Rachel Carson, but the influences behind her work and the process she took in writing her books.  He explores the subjects behind her books in such a way, that I feel smarter for reading it.  I can honestly say I now know more about our country's history with nuclear testing and pesticide use than I ever even fathomed before.

One of the side benefits or reading a book like this, is how it tends to add to your reading list.  I have so fallen in love with and admire the Rachel Carson that the author presents to us, that I have now added her four books to my wishlist.  I have also added a few other books that inspired her to be, from what I've read, a lyrical writer who was able to draw her readers into dense subjects and complicated issues.  She is the type of writer that is a joy to read, and I'm sure she was the type of reader it would be beneficial to emulate.

Now for the giveaway.  I have one copy, generously offered by the publisher, up for grabs.  If you are interested in entering, please leave a comment with your email address.  The giveaway is, I believe, only open to residents of the US.  You will have until 11:59 pm CST, on October 9th to enter.  I will use random.org to pick the winner.

I'm with your Ryan, I have no scientific way to choose which books to accept for review and which ones to say "ay" or "nay" to.

It depends on the day.

Ryan, thank you for bringing this book and this author to our attention. It always amazes me how the words of my friends direct my reading choices and sometimes put me in touch with authors I may never have chosen.
You do this quite often.
Thanks Deb
dhaupt3at gmail dot com

I know how you love the Diane Rehm Show, so I'm not surprised you discovered a book while listening to it. I really enjoy books like this so I'd love to be entered in your giveaway. kathy(at)bermudaonion.net

thanks for this great giveaway which would be treasured. Your post was special and fascinating. elliotbencan(at)hotmail(dot)com

Ryan, what a fantastic review -- I love reading about readers having emotional experiences with their reads! I, too, have a very random/knee jerk response to review requests, and it's getting better as time goes on -- I have many less misses this year than last year!

Rachel Carson is one of those figures I have general warmth toward/for but honestly, I don't know much about her! Will have to get this book regardless of the giveaway because your comments on it have me super intrigued/excited.

What an interesting giveaway. thanks for this chance. saubleb(at)gmail(dot)com

If you find that scientific answer... let me know. :)

I am interested in Rachel Carson, but haven't read her books. Yes, I know about her most important work. Know all that was in it, but I just didn't read it. It's one of those things you are curious about but are afraid of reading because you know you are going to get upset. Still... this has me curious... so...
books (dot) things (at) yahoo (dot) com
:)

I go with what my gut tells me to read!! I'm glad that you picked this one because I thought your review was incredible!! You've made me want to read this one and more!!

Your review has drawn me in. thanks for the giveaway.

I had seen that this book was releasing and meant to add it to my reading list anyway, so would love to win a copy. I haven't read her other books yet, but know of the impact she has had.

Thanks for this giveaway. I'm on Carson's side and would love to read this.
Emma
ehc16e at yahoo dot com

Thanks for this giveaway. I'm on Carson's side and would love to read this.
Emma
ehc16e at yahoo dot com

Wonderful review, as usual. I choose my review books pretty much the same way, Ryan. It has to appeal to me, make me feel something. I don't think I was as selective in the beginning as I am now.

Thanks for the giveaway!
truebookaddictATgmailDOTcom

P.S. I would love if you would write a guest post for Castle Macabre this month. I'm hosting a month long event, Season of the Witch.