The Man In Lower Ten by Mary Roberts Rinehart 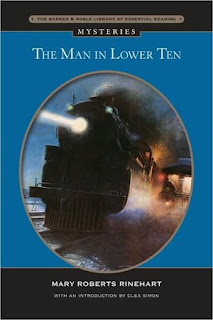 In order to pickup legal papers in another city, a young lawyer, Lawrence Blakely, must ravel from Pittsburgh to Baltimore on what he expects to be an uneventful train ride.  However the trip quickly becomes anything but boring; Blakely's papers are stolen, and his bunk "lower ten" is occupied by a dead body.  But that's no all Blakely finds himself in the middle of.  He also grapples with a deadly train wreck, a ghostly haunting, and a sexy yet possibly dangerous love interest.

I think by now that everyone knows I'm hooked on Mary Roberts Rinehart.  After being introduced to her last year by Yvette of in so many words..., I don't think it's been possible for me to get enough of the twists and turns she develops her mysteries with.  I've even found myself rooting for the couples that Roberts pushed together as they faced danger and possible death.

I think it's also safe to assume that most of us realize that just because you love an author, doesn't mean you are going to love every book they wrote.  I'm a huge Agatha Christie fan, but I don't love every Poirot book she did.  Now that's not to say I don't enjoy reading them, because I do.  I still think the worst book from an author like Agatha Christie or Mary Roberts Rinehart is still better than half the crap that comes out now.  I guess I'm going to have to put The Man In Lower Ten in that category for me.  It was good, but not nearly as good as others I've read by her.

I really thought I was going to enjoy this one more than I did.  I adore mysteries set on a train and the fact that the train scene ends with a horrific derailment had me all a flutter.  I even really enjoyed the premise of this one for me, and I wish I could tell you a specific reason why this one didn't do it for me as much as others have.  I think part of it may have been the frantic pace the characters seemed to be stuck in.  Everything was moving and developing so quickly that I don't think I was really ever able to pay attention to everything that was going on.  I actually don't know, I think I'm grasping at straws to explain away my lack of interest in this one.  I guess I'm just going to chalk it up to not every book is meant for every person.  I can't even say it's not worth reading, because as I stated earlier, it's still better than most of what's out there. I would just start with some of her other books first.

I have already finished two other Rinehart books since I read this, and am about done with a third, and I have to say that so far, The Man In Lower Ten is a bit of a aberration from my normal reaction to her writing.

I really need to read some Mary Roberts Rinehart.

Thanks for visiting my blog yesterday, I'm now a new follower of yours :)

I'm not a huge mystery reader and that's probably why I haven't heard of Rinehart before. Even though you didn't enjoy this book as much as some others, reading this review has intrigued me to look into this author and maybe find some mysteries that will hook me.

I love a good mystery and I agree that the setting is agreeable. It is a shame that it was somewhat of a letdown. Thank you for your informative review.

I need to pick out a few titles of vintage mysteries as well. Do you have another favorite by this author? This one sounds interesting, but I would prefer another book you like more.. Let me know!

The current authors need to spend a little time reading these books so that they can find out where they're falling short with their stories!!

This was the first Rinehart I read. Maybe that's part of the reason I don't love her quite as much as Marsh or Christie.