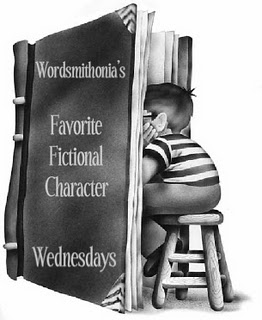 Well it's my last day of vacation and I'm probably going stir crazy by now.  I'm probably wishing I had gone back to work today instead of extending my vacation to 6 days.  Now I could be completely wrong about that, but I doubt it.  After looking at the weather forecast I'm thinking my vacation will have been spent in really hot temperatures, which I don't like.  I abhor the heat and tend to avoid it as much as possible.  So while you are reading this, I'm probably staying in bed and watching a Buffy marathon.  I know it's an odd thing to do on the last day of vacation, but it's so relaxing too.  Who knows though, I may decide I love the heat and go for a run in the 100 plus weather we are supposed to have.

I must admit that I'm feeling a little sad to be leaving some of my favorite children's book characters behind for a while.  This is the last Wed. of the month and next month I'm turning it over to some fabulous guest bloggers.  Once again I had to put some names in a hat and let fate decide who was going to be the last character featured this month.  Needless to say, I wouldn't have been unhappy with any of them, but I did get a little excited when I drew out the name of Sammy the Seal.  I loved him as a kid.  So with no further fuss on my part, I present to you Sammy, the seal who needed to know what was on the other side of those walls. 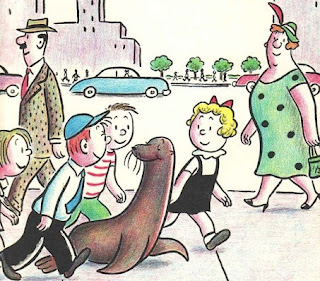 Sammy has been living a pretty content life within the walls of a zoo.  He gets fed on a regular basis and likes having the kids admire him.  But like most of us who are living the good life, Sammy starts to wonder what else is out there.  So one day our wandering hero decides he wants to see what else life has to offer.  He walks out of the zoo, with the keeper's blessing, and embarks on an adventure I'm sure he never forgets.

At first the world seems to be filled with sights and sounds the likes of which Sammy has never seen.  The fast moving cars, the tall buildings that tower above the streets, and even bathtubs.  You see, Sammy has never seen a bathtub before.  Though the bathtub is a bit smaller than his pool at the zoo, Sammy has to see what it's all about.  Of course the man who was running the bath wasn't all that impressed with the idea of a seal stealing the show.

It's when Sammy ends up at a school that he really starts to realize this trip may have been worth it after all.  I'm still not sure why the teacher would have allowed Sammy to stay in the class, but I think both Sammy and I are happy that she did.  Sammy got to do all kinds of things he's never experienced in the zoo before.  He joined the kids during their singing lesson.  He showed them how well a seal could play volleyball, he was amazing.  He even learned how to read.

Now you may be thinking Sammy had the time of his life that day and that he never wanted to go back to the zoo.  You would be part right.  Sammy, like a lot of us who stray far from home, realized something.  No matter how exciting or amazing new experiences can be, they still don't match up to that sense of being at home.  The world can be an exciting place, but it can't replace that sense of belonging and safety that being at home can instill.  So at the end of the day, a happy Sammy goes back home where he belongs.

I hope you were wrong - I hope you're having a blast on your vacation!!

As soon as I saw Sammy's adorable face I got this huge grin on my face...what a great character to end with!!

Whatever you're doing today I hope you're having a great time!

Hope you're having a great vacation too, Ryan. :)

By the way, the fabulous illustrator for Sammy's adventures is the one and only Lois Lenski.

I never read Sammy the Seal but the picture you posted looked so familiar that I was racking my brain to try to figure out how I know this book. Then I realized that it's probably the same author as one of my favorite childhood books, Danny and the Dinosaur, and when I looked it up I saw that I was right. Phew, I feel better now that I figured that out. I'll have to get a copy of this book as see if it's as good.