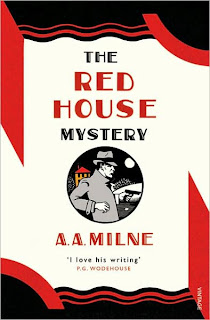 The owner of The Red House, Mark Ablett, is know for hosting entertaining house parties.  He is gregarious and overly generous to his guests, who know to walk the party line.  Mark Ablett is also know for his temper, so his guests know when to not push him any further.  When Mark receives a letter from his long lost brother, the guests are sent out on a golfing trip and when they come back, the brother is dead and Mark is missing.

I have to say up front that before I got a hold of this book, I never knew that A.A. Milne wrote a locked room mystery.  Who knew that the voice behind Eeyore, who just happens to be my hero, could put that same talent to work in telling a hilarious and witty mystery.

When Anthony Gillingham shows up on the doorstep of The Red House to visit his friend, Bill Beverly, he happens upon a rather strange site.  A frantic man is banging on the door of a locked room, trying everything he can to get in.  Before he knows it, Anthony is helping the man break in, only to discover a man's body with an extra hole in it.  The man who was breaking into the room, was Mr. Cayley, Mark Ablett's cousin and assistant.  He is the one that brought Mark's brother into the room so Mark could talk with him and find out what he's doing there.  When a gunshot is heard Cayley does everything he can do to get into the room.  It's only by chance that Anthony shows up to assist him in this endeavor.  When they finally get into the room, Mark's brother is dead and Mark is missing.

It's quickly decided upon that Mark killed his brother and fled the scene.  When all the guests are sent home, Anthony and Bill decide to stick around and solve the case for themselves.  Anthony, who came into a rather large sum of money, has been wandering through life the last few years.  He tries out occupations for a while until he decides he's had enough of that job.  When a murder is deposited before him, he decides that detective will be his next career choice.  With the assistance of his very own Watson, Bill, Anthony puts his sharp mind to work to figure out why Mark killed his brother and fled.  With a lot of smart humor at his disposal, Anthony begins to dig into the truth of what really happened that afternoon.  The journey will take him into secret passageways, watery searches, and ghosts out of legends.  By using his brain, witty banter, and a lot of luck, Anthony not only solves the case but allows a rather unusual out of the guilty party.

At the end of the book, I was really wishing that his publishers had allowed Milne to write more mysteries.  The wit, sarcasm, and humor that is so prevalent in the Winnie the Pooh books are all on full display with The Red House Mystery.  It was a fun, light romp of a mystery that was pure brain enjoyment.  The crime itself is far fetched and the characters are over the top, but the I wouldn't have had it any other way.

I've been meaning to get my hands on this book for ages, Ryan. Now that you've endorsed it so heartily, I will have to try even harder. It sounds like just the sort of thing for a lazy summer afternoon. :)

Ooh! This looks great! I've just added it to my Kindle (thank you Amazon for having it when my library didn't!)! Can't wait to read it!

Thanks for telling us about it!

I had no idea Milne wrote something other than the Winne-the-Pooh books. This sounds fabulous!

I didn't realize that he wrote this either and it is sad that he never went further with this genre!!

I just downloaded this for my Kindle - thanks for bringing it to my attention. I love Milne!