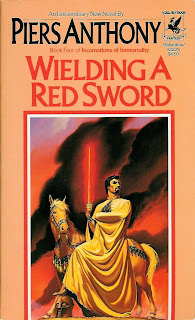 Mym was a dutiful son, but his father the Rajah interfered in his love life once too often. Rather than wed without love, he took up the Red Sword, symbol of the office of the Incarnation of War.

At first he thought his efforts could ameliorate some of the suffering caused by Earth's constant petty wars.  But he found that behind all his involvement were the clever traps of Satan.

When seeming mischance placed him in Hell, Mym organized a great rebellion among the Damned.  And Satan seemed to capitulate.  But free again, Mym learned that Satan had been busy stiffing up riots and war.  Now it seemed things had gone too far and Satan must surely win.  There was only one desperate chance....

Ever since I started to reread this series for about the bazillionth time, I've been trying to remember the first time I ever read them.  I want to say it was some time in high school, but I was really never into scifi that much, and whatever else he may be, Piers Anthony falls into that category fairly easily.  So my best guess is even younger, but for all I know, it could have been during my college years.  Needless to say that my brain has just been a little fuzzy lately.

What I do remember though is how much I love the Incarnations of Immortality series, and book four is still a lot of fun after all this time.  Mym is one of those character that every boy wants to be and every girl wants to date.  Well, I would want to date him too, but I digress.  He is both strong and gentle.  He can sweep a girl (or guy) off their feet just by being himself.  He always strives to do the right thing though it gets him into trouble at times.  He never backs down from a challenge.  He's loyal, dependable, intelligent, loving, and he's a prince.  He is an heir to a vast fortune and a life of luxury awaits him and whoever he picks as his consort.  There are just two problems.  One he doesn't want to take his father's place.  He has an older brother so it shouldn't even be an issue, but you never know in these types of things.  Princes get killed all the time.  The other problem, he has a horrible stutter.

So Mym (by the way not his real name) does what any prince in his situation would do.  He runs away and joins a group of traveling performers.  He's ashamed of his stutter so he pretends to be mute and he quickly finds a place among the other misfits.  Now this is the point of the book, within the first few pages actually, that Mym's life begins to change forever.  Traveling with the group is Orb, the daughter of Niobe who is the current Incarnation of Fate.  The two quickly fall in love and Orb even shows Mym a way of getting over his stutter.  All he has to do is sing and the stutter goes away.  It's actually not as cheesy as it sounds.  Alas, their love is not to be.  Mym's brother dies in an accident which forces the Rajah to comes and take him home.

From there Mym is forced into on situation after another, including an arranged marriage.  It's his interactions with that young woman that really makes Mym shine as a human being and as a man.  They are both in love with other people and do everything they can to stop any feelings from developing between the two of them. It's not long before reality takes over and the two eventually fall in love.  From there, it's all down here.

Through a series of events that neither one of them could have ever predicted.  Their marriage is called off which sends Mym into a blind rage.  It's that rage that calls the Red Sword to Mym which makes him the Incarnation of War.  This is where the journey starts to get fun.  The author forces Mym to deal with Purgatory, learning the ropes of his new job, an endless stream of wars, and seductive demonesses sent by Satan to send him down the wrong path.

When that wrong path lands him in Hell with no real way of getting out, Mym does the only thing he knows to do, fight.  He leads a revolt of all the damned souls that haven't been getting a fair trial.  He even enlists, and yes there are animals in Hell, the animals that have been condemned for one crime or another.  He doesn't know it, but the fate of the world hangs in the balance of how Mym fares in his battle with Satan.  Either the world will end on Mym's treatment of a damned princess and a succubus or the human race will be spared total annihilation.

On a Pale Horse
Bearing an Hourglass
With a Tangled Skein

When I saw this review in my reader, I knew it was from you! I love your enthusiasm for this series, but don't think it's for me - my sister might love it, though.

Oh this is one amazing review! I do like what you are saying about this. :) Thank you!!

I thought the hero was going to be the usual perfect guy but then you revealed the stuttering part and all of a sudden, he became more like a real guy. The plot has many twists; poor Mym can't seem to get a break!

Great review. I'm trying to read 2-3 series now but I do hold dear to my heart the series I grew up with. I am afraid to re-read them because I know they won't hold the same magic that I remember them to be.