Alphabet of Thorn by Patricia A. McKillip 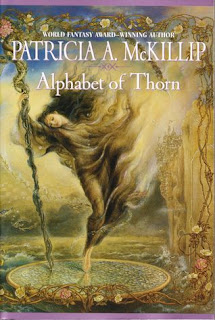 Deep inside a palace on the edge of the world, the orphan Nepenthe pores over books in the royal library, translating their languages and learning their secrets.  Now sixteen, she knows little of the outside world - except for the documents that traders and travelers bring her ti interpret.

Then, during the coronation of the new Queen of Raine, a young mage gives Nepenthe a book that has defied translation.  Written in a language of thorns, it speaks to Nepenthe's soul - and becomes her secret obsession.  And, as the words escape the brambles and reveal themselves, Nepenthe finds her destiny entwined with that of the young queen's.  Sooner than she thinks, she will have to choose between the life she has lead and the life she was born to lead...

Before I read this book, I had only read two other books by Patricia A. McKillip.  I read and reviewed Solstice Wood back in 2010 and I had read another book, can't remember the title, a few years before that.  What I took away from both those books was how exquisitely complex McKillip's grasp of the English language really is.  She is a master wordsmith and Alphabet of Thorn drives that home.

With a storyline that spans thousands of years and involves languages made of thorns, fish, and other such symbolism, Alphabet of Thorn could have been a story that easily lost it's way.  With the skill of a master weaver, McKillip not only kept the story smooth and easy to understand, but she made it an absorbing account of family and magic and how the past has almost total control on the present.  She weaves the lives of Nepenthe and those around her into a tapestry that is both complex and beautiful.

Where McKillip truly shines is in her mastery of language and how Wernicke processes and bounces the sounds of those words around in the reader's imagination.  It allowed me to get lost in the linguistic nature of both the story and McKillip's writing style.  It was one of those books that is a pure pleasure to read for the simple fact of the way the author was able to piece words together into a symphony of story and sound.

You struck all the right notes in your review, Ryan "mastery of language" "symphony of story and sound" - I now HAVE to read this book!

Great review. I'd probably be lost in the book myself but I enjoyed reading your review of it :)

I have one of her books on my personal shelf. You have me interested in reading her writing!