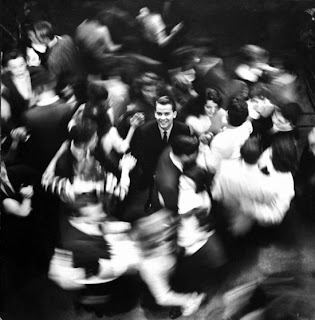 I think I can honestly say that I never thought of American culture without Dick Clark being there.  Whether he was on American Bandstand, $24,000 Pyramid, TV's Bloopers and Practical Jokes, The American Music Awards, or Dick Clark's New Year's Rockin' Eve; he has been in our living rooms since 1952.

I remember watching American Bandstand as a kid and wanting nothing more than to be there, dancing and having a great time.  The show ended before I ever got old enough to wake that dream come true, but that show lived on in my heart for years after.  Now with Youtube, I get to relive some of those dreams all over again.

Dick Clark is one of those pop culture icons that will never completely disappear from the American psyche, nor should he.  He helped shape the musical taste for generations of Americans and has earned not only our respect but our love as well.  He will be missed.

Part of my childhood died today. When I was a teen I never missed American Bandstand.

Ryan what an eloquent and true thing. He will be missed by more than generations but by a culture as well.
Deb

It's sad. And I have to say New Years will never be the same for me. Sad.

I'm so sad...Saturday mornings were spent with Dick Clark and American Bandstand and every New Year's Eve since I can remember. He will be missed!!

American Bandstand was the coolest thing happening when I was a kid.

New Years Eve won't be the same without him!

I was sad to hear this. He will definitely be missed. What will New Year's Eve be like without him? RIP Mr. Clark.

I was stunned when I heard the news. Although I can not say that Dick Clark was in my thoughts frequently through the years, he was just always a part of life as we know it... know what I mean?

The world has lost another great man.

What a lovely tribute! I never watched American Bandstand, but knew him from game shows and his New Year's Rocking Eve. His loss will be felt worldwide.

I remember watching him the entire time I was growing up. Loved American Bandstand and New Year's Rockin' Eve. He will be greatly missed!

I guess it says something about me that I know him best for co-hosting "Super Bloopers" with Ed McMahon.