Right At Your Door 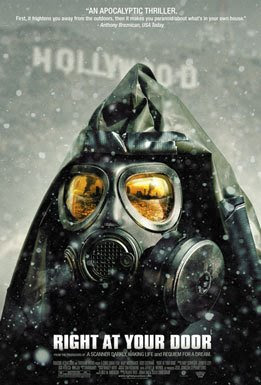 I recently saw this movie for the second time and felt compelled to urge everyone to watch it if they haven't all ready. I had originally seen it in 2006 when it first came out and I have not been able to get it out of my head. So I watched is a few days ago to see if I would feel the same way about it, and I did.
The basic premise is pretty straightforward. What happens to the lives of two people when a dirty bomb goes off in a major city like L.A.?
I don't want anyone to think this is a disaster or action movie because it's not. This is a movie about two people who have to deal with the fear and lack of control they feel when the unthinkable happens in on their doorstep.
The main characters are Brad and Lexi. Brad is a unemployed musician who stays at home while Lexi makes the commute into the city everyday in order to support them both. One morning after Lexi leaves a dirty bomb goes off jamming the freeway and cutting off all communications other than the occasional TV or radio report.
Brad, after not being able to get a hold of Lexi, leaves the house in a failed attempt at trying to locate her. After being turned away by the police and being forced to go back home, terror starts to creep into his mind. A report cautions everyone to seal up their homes and not let anyone who has been exposed to the toxic cloud in. When Lexi show up, Brad is faced with the unbearable choice. Protect himself or save his wife?
I don't want to get into a lot of detail but the ending will surprise you and leave you wondering two things. What would you have done? Would you let fear take over the way Brad did or would you have done something else? Secondly, is the government ready to handle an event like this? Would those in charge handle it this way in reality?
I urge everyone to watch this movie, here is the trailer.
Posted by Ryan at 12:04 AM

Hi - I'm so pleased I came by! I saw a trailer for this movie and forgot what it was called. I just couldn't remember and so couldn't find it, but thought it looked great. I then pop along here to check out your Friday Fillins and here it is! So, yay! Lovin' your blog btw :)

Thank you for the comments and I hope you get to see the movie soon. It's a great movie and come back and let me know what you thought

I can't imagine the nightmares I would have after watching this! Without having seen the movie, I can tell you that if in similiar situation, I would not be brave. I would not have courage or dignity. I would be hiding under the bed with my dogs!

Deb, you would be great. I think you would be tougher than you give yourself credit for. If only to make sure the dogs were kept safe.

That's true, I would do anything for the dogs!

Kind of creepy...I might have to check this one out.