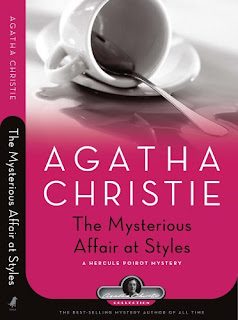 When I had decided to read every Agatha Christie mystery I was just going to go about it willy-nilly, read them as I got them with no regard for publishing order. However, when I posted I was doing this on the Mystery board at the Barnes & Noble book club site it was suggested I go about it a little differently. Becke and Dulcinea both convinced me the only way to do this right was to read them in order because several of the reoccurring characters age throughout the books. I wisely bowed to their wisdom and changed up my game plane a bit.


Now I had a slow start to my self challenge but I finally finished the first book, The Mysterious Affair at Styles. Now this was a book I had read several time,s but this time I tried to read the book as if it was my first time through. This was a lot harder than I originally thought it would be. I believe I managed to do a OK job at it though, and here are a few of my thoughts.


This is not only the first mystery novel Agatha Christie published, it is also the first appearance of the famous Hercule Poirot. Monsieur Poirot and his "little gray cells" went on to star in over 30 novels and over 50 short stories. Leaving out everything else I have read with him in it I came away still liking this strange overly pompous, egotistical man. The man is cunning and so sure of himself he is willing to take risks with other peoples lives in order to produce the outcome he desires.


I have always found myself fascinated by a man who is described in this book as "hardly more than five feet, four inches, but carried himself with great dignity. His head was exactly the shape of an egg, and he always perched it a little on one side. His moustache was very stiff and military. The neatness of his attire was almost incredible. I believe a speck of dust would have caused him more pain than a bullet wound." This description was given by Arthur Hastings who is narrating the book. Colonel Hastings would appear regularly throughout Hercule Poirot's career as a Watson like character. Poirot's reasoning and skills of observation are wonderful to watch play out as he solves the case.


This is also the first appearance of Inspector Japp of Scotland Yard. Not much is revealed about him in this book other than he had previously worked with Poirot and has full trust in him.


I loved the book and recommend if to anyone who has never read a Agatha Christie book. This is a good taste of what she has to offer as a story teller. In this book as in her others, the clues are always there for you to spot and there are never any surprises. One of the characters from this book, Evelyn Howard, describes the way bad writing in mystery novels so often goes "Lots of nonsense written....criminal discovered in last chapter. Every one dumbfounded." This is not the case for Agatha Christie books, the killer is always there to spot if you are as clever as Hercule Poirot.


Set in Essex in the English countryside. The Mysterious Affair at Styles is one of the great classic murder mysteries. The victim, Mrs. Emily Inglethorp, is the wealthy mistress of Styles Court. After an evening of entertaining family and guest, she is found poisoned in her locked bedroom. The long list of suspects includes her gold-digging new husband, her stepsons, her best female friend, and a visiting doctor. As luck would have it, a brilliant, if rather eccentric, detective is among the company at Styles.
Posted by Ryan at 11:18 AM

I am so excited about your Christie project! I read my first Christie when I was visiting my aunt in Albuquerque when I was 15, and I found a copy of Funerals are Fatal on her shelf. I don't remember what came next, but shortly after that I struck gold. I was reading an Agatha Christie novel when the couple I was babysitting for came home. The woman was so excited to see what I was reading, she dragged out a huge box of old Christie's and GAVE them to me! I still have them, and, even though they are falling apart, I love the old covers.

I've read all the Christie books, plus her plays, poems and Mary Westmacott books. And just about every book written about her, too.

While Styles wasn't a favorite of mine, I like to read it to rediscover the way Christie introduced us to Hastings, Poirot and Japp. David Suchet captures Poirot's essence so well that I now have a hard time separating my mental image of Poirot from Suchet's characterization. It's funny to think that, in Style's, Poirot was new to Agatha Christie, too!

Good luck with this, Ryan, and keep us posted about your progress at the Mystery Book Club!

Um, I'm perhaps a bit more laidback in my approach to Christie, but I love her and I'm sure you'll have a good time with the challenge! I agree that it's definitely best to read the books in order. It's just better that way.

Good luck on your challenge, and I'll be looking forward to reading the reviews!

Thank you both for dropping by. The encouragement is appreciated!

I'm also in the challenge and I liked this one a lot because of our first introduction to Poirot. My review can be found here. I will add a link to your review at the bottom of it here shortly.