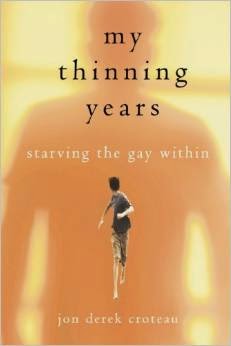 As a child, Jon Derek Croteau tried desperately to be his father's version of the all-American boy, denying his gayness in a futile attempt to earn the love and respect of an abusive man.  With this he built a deep, internalized homophobia that made him want to disappear rather than live with the truth about himself.  That denial played out in the form of anorexia, bulimia, and obsessive running, which consumed his as an adolescent and young adult.

It wasn't until a grueling yet transformative Outward Bound experience that Jon began to face his sexual identity. This exploration continued during college, and he started the serious work of sorting through years of repressed anger to separate from his father's control and condemnation.

My Thinning Years is an inspiring story of courage, creativity, and the will to live - and of recreating the definition of family to include friends, relatives, and teachers who support you in realizing your true self.

Going into it, I knew this was going to be a hard book for me to read.  I think I even said no a few times, before finally agreeing to review the book.  And now that I'm sitting down, in front of my computer, typing up my review, part of me is wishing that I had gone ahead with my first instinct.  This was a hard book to read, it brought a lot of long buried emotions to the forefront, and it's left me feeling a little drained.  At the end of the day though, I'm glad I took the time to read it. It was a hard journey, but at the end of it all, like all stories of it's kind, it's as life affirming as anything else you will come across.

I didn't face the same issues Jon did, my father wasn't around and I never looked down on myself for being gay, but that doesn't mean I had it easy.  I think like many GBLT kids, I had a hard time dealing with what I was feeling, and couldn't understand all the thoughts running through my head.  For years I would pray before I went to bed, that if my being gay was wrong, I would rather die in my sleep.  I didn't want to be gay, I didn't understand why I was gay, but I knew I was from a young age, and over time, I grew to accept it.  I still wrestled with depression and contemplated suicide a few times.  I even went as far as making some half-hearted attempts at cutting my wrist with a pair of scissors.  But in the end, through some early acceptance of a few trusted people, I grew to realize that the only choice I had was in accepting my sexuality, or living a miserable life denying it.

Reading, or hearing, another's story, tends to bring all those long buried emotions back to the surface.  It's the reason why I initially turned down the invitation to read this book, those aren't pleasant memories, and I don't particularly like remembering them.  But I think what Jon did, what any of us do when we share our stories, is reaffirm an essential truth; that our lives are worth something, that regardless of the journey that was forced upon us, that the end result it worth all the pain, regardless of it was self inflicted or imposed on us by others.  By sharing his story, Jon has reaffirmed that an honest life is worth living, being true to yourself is the worthiest life goal there is.

Love how much honesty was in this review. I find it hard to read books that have topics that have been hard in my life. Anxiety/depression for me are hard to read about. I read to escape this world so reading about things that remind me of hard times is not something I always enjoy. But I am glad you read it and shared this review.

I am glad to see that reading it was, in all, a good choice for you. As you know, I am reading Sweet Tooth right now, and as funny as it is, it is also very insightful into how the struggle goes. These type of books that bring up our own baggage are some of the most challenging, yet often the most rewarding, books to read. I still get like that when reading a book containing sexual assault and that was just one moment in time.

Thanks for being a part of the tour Ryan. I'm glad to see that this book reaffirms that being true to oneself is one of the things that makes for a good life.