The Rule of Four by Ian Caldwell & Dustin Thomason 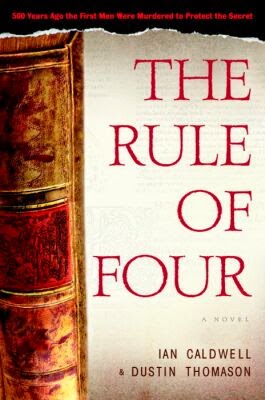 Princeton.  Good Friday, 1999.  One the eve of graduation, two students are a hairsbreadth from solving the mysteries of the Hypnerotomachia Poliphili, a Renaissance text that has baffled scholars for centuries.  Famous for its hypnotic power over those who study it, the five-hundred-year-old Hypnerotomachia may finally reveal its secrets - to Tom Sullivan, whose father was obsessed with the book, and Paul Harris, whose futures depends on it.  But as the deadline looms, research has stalled - until an ancient diary surfaces  What Tom and Paul discover inside shocks even them:  proof that the location of a hidden crypt has been ciphered within the pages of the obscure Renaissance text.

Armed with this final clue, the two friends delve into the bizarre world of the Hypnerotomachia - a world of the forgotten erudition, strange sexual appetites, and terrible violence.  But just as they begin to realize the magnitude of their discovery, Princeton's snowy campus is rocked: a longtime student of the book is murdered, shot dead in the hushed halls of the history department.

So begins a cycle of deaths and revelations that will force Tom and Paul, with their two roommates, into a fiery drama spun from a book whose power and meaning have long been misunderstood.

I first read this book right after it came out, back in 2004.  It was a year after Dan Brown's The Da Vinci Code, and it was a time in publishing where it seemed as if every other book that came out, was trying to go for the literary/intellectual thriller. I don't think they were possible to get away from that year, if you read books, you probably read at least one of them.  The Rule of Four was one of the few that grabbed my attention when I was pursuing the new release shelf at the library.  I checked it out, and had it read all in the same day.

I'm not going to decry The Da Vinci Code, because of all of Dan Brown's books, that one is my favorite, but lets face it, Dan Brown is great at one thing, writing fluffy, cotton candy books.  There is nothing wrong with that, sometimes you need something that is just pure entertainment, and he is great at it.  What I respect about Ian Caldwell and Dustin Thomason, is that they wrote an entertaining book, but didn't populate it with one dimensional characters who don't evolve and have almost no true relationships with each other.  Their characters are fully functioning, three dimensional constructs, they could be any of us, if we were obsessed with obscure texts and had men being killed around us.

This is a smarter book than anything Dan Brown has written, and it has a lot more personality to it.  Instead of trying to write a clever book, that showed off their research skills, the author's chose to write a book that gave us an interesting mystery, but actually told a story.  The Rule of Four is not just about the search to unearth the truth about the Hypnerotomachia, it's the life story of the men who have devoted their lives to it.  It's the story of how obsession can quickly turn into something so dark and twisted, that it robs men of their sanity, and their lives.  It's the story of the interpersonal relationships and how fragile, or strong, they can be in the face of adversity and love.  At it's core, it's a story of friendship, and the ties that bind us together, even when we may not want to be tied to that person.

I wasn't a fan of The Da Vinci Code so I kind of gave up on the genre. This one sounds like it's worth picking up.

This does sound good! Not a fan of DB, but do enjoy fluffy books ;o).

I read this when it first came out so my memory is a little hazy but the author's note at the end disgusted me. The authors had painted a fine picture of Renaissance Italy (it was the most exhilarating passage of the whole book) only to say at the end that they had taken liberties with certain facts like presenting people born centuries apart as contemporaries. I thought that was cheating the readers and it simply killed the book for me.

I liked The Da Vinci Code, but I liked Angels and Demons better. Go figure. ;) I have had The Rule of Four in my home library almost since it came out, but have never got around to reading it. It sounds like I need to.