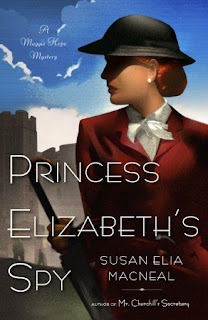 As World War II sweeps the Continent and England steels itself against German attack, Maggie Hope, former secretary to Prime Minister Winston Churchill, completes her training to become a spy fro MI-G.  Spirited, strong-willed, and possessing one of the sharpest minds in government for mathematics and code breaking, she fully expects to be sent abroad to gather intelligence for the British front.  Instead, she is dispatched to go undercover at Windsor Castle - to tutor the young Princess Elizabeth in math.  Yet the upstairs-downstairs world at Windsor quickly proves more dangerous - and deadly - than Maggie ever expected.

I'm going to admit, right up front, that I've been a bad blogger lately.  I really haven't had the time or the energy to sign in and write reviews.  As of right now, I have 11 finished books, waiting patiently to be taken off the shelf and a review written.  I actually wanted to get a review of Mr. Churchill's Secretary, this books predecessor, but alas, I ran out of time.  I actually forgot I had to have this review up today.  So I'm here on election day, having already voted this morning, writing a few reviews.

After reading Mr. Churchill's Secretary, review coming later, and Princess Elizabeth's Spy, I think it's safe to assume I'm in love with this sub genre.  Now I'm not sure if it has a name or not, but this explosion of mystery novels set in England during the two World Wars, has me panting for more.  Now I guess I better explain myself or you are going to assume I'm some sort of drooling baboon, one that doesn't utter anything other than "ugh."

I know I'm mentioned it before in my reviews of books by Jacqueline Winspear and Charles Todd, but there seems to be an odd sort of "gentleness" the various authors seem to bring to the table.  I'm not sure if that tone lends itself to the genre or to the heroines the authors create, but I can imagine that Maggie Hope, Maisie Dobbs, and Bess Crawford would find themselves fast friends and three peas in a pod.  Even the chaos of their lives, the world changing events going on all around them, they do their jobs.  They go about their business, doing what they can to make things, even in a small way, that much better.  Men and women are murdered around them, and they comport themselves with such grace and strength, that I find myself in awe of all of them.  They rise to the occasion and get the job done.

As far as Maggie goes, she would be the feistier of the three friends.  She knows she has the education and brains to run with the big boys, but had to fight her way into the position to be able to prove it.  I can't get into too much of her back story, otherwise I would be giving you a review of the first book as well.  I guess that means I can't really say anything about her in this one either.  What I can say is that I find her to be a fascinating person, who doesn't always see everything going on around her, but is always willing to move on once the truth comes to the surface.  She has a heart and doesn't see everything in black or white, but does have a strong sense of good and evil.  She is willing to put herself in danger to save her charge, and is willing to give her life for something she believes in.

I would like to thank Trish of TLC Book Tours for the opportunity to read/review this book.  Please visit the tour page to read other reviews.
Posted by Ryan at 4:41 PM

Loved your review and I agree about that 'gentleness' these books exude!

I'm behind on reviews too. The reading is much more fun than the writing, isn't it? This sounds like a series I'd love.

I'm thinking I'll pick up both of these for my mom for her birthday. Which works well for me two ways - I get her a gift and I get to read these when she's done with them!

Wonderful review Ryan, I added it to my wishlist after Staci gave it such a good rap and I picked up the first few by Charles Dodd after seeing your reviews for them, so thanks!

A book I would love to read, thank you for your review!

Have you read the Mary Russell books? I'm wondering if she would be a good fit with Maggie, Bess, and Maisie ...