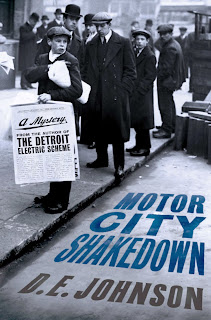 Detroit, 1911.  Seven months have passed since Will Anderson's friend Wesley McRae was brutally murdered and Will and the woman he loves, Elizabeth Hume, barely escaped with their lives.  Will's hand, horribly disfigured from the sulfuric acid he used to help save them, causes him constant pain, forcing him into morphine addiction.  He lives for nothing except revenge against the people who contributed to Wesley's murder - first among them crime boss Vito Adamo.

When Will stumbles upon the bloody body of Adamo's driver, Carlo Moretti, he knows he'll be a suspect, particularly since he was spotted outside the dead man's apartment that same night.  He sets out to find the killer, and the trail leads him to a vast conspiracy in an underworld populated by gangsters, union organizers, crooked cops, and lawyers.  Worse, it places him directly in the middle of Detroit's first mob war.

The Teamsters want a piece of Will's father's car company, Detroit Electric, and the Gianolla gang is there to be sure they get it.  To save their families, Will and his ex-fiancee, Elizabeth Hume, enlist the help of Detroit Police Detective Thomas Riordan, the teenage members of what will one day be know as the Purple Gang, and Vito Adamo himself.  They careen from one danger to the next, surviving shootouts, kidnappings, and police brutality, while barreling toward a devastating climax readers won't soon forget.

I think I've already made my first New Year's resolution for 2012, I will not review books that are not the first of a series.  I will not, for my own sanity, review a book that is the 2nd, 3rd, 4th, or....... in a series.  It's too stressful and it keeps adding to my already growing wishlist of books that I'll never have time to read.  The crappy thing is, I keep reading some fantastic books because of my poor decision making process.

Normally, and I think I've gotten lucky so far, most of the books haven't required me to have read the previous one.  This was one time, while not necessary, I'm really wishing I had done so.  The characters of Will and Elizabeth had been through so much in the previous book, and while some of it is explained in this one, I still felt at a loss sometimes to truly understanding the deep emotional scars between them.  It's apparent they have been through hell and back, I just wish I had been along for the ride.  It would have been nice to experience the background first hand, instead of in bits and pieces.

I love mysteries, I love noir even more so this book was a terrific treat for me.  It had all the gritty, dirty elements that I love in a book like this and I got lost in the story every time I was able to pick it up and dive in.  Will is such a damaged character who is trying his best to get him and those he loves out of dangerous situation.  If he makes the wrong decision or abuses moriphine too much, his entire family could be killed.  It's a pressure that combined with the events of the previous year, is about to put him into the ground as well.  He does everything he can to raise above it and protect those he loves, and in the end he does it.  He just has to go through hell first.

I'm really looking forward to not only reading the first book in the series, but any others that this author chooses to write about Will, Elizabeth, and the rest of the cast (at least those that didn't die this time around.)

Yeah, there are some series that just really need to be read in order. This sounds like it has some great characters, though.

I have read some great reviews for this book but I think I will make sure to read the first book before this one. It can definitely be annoying to read a later book in a series without reading its predecessor.

I'm with you on reading the first book too, Ryan! I think they should've toured both of the books. Now, I have to go back and read it!!!

I was getting all excited reading the synopsis and then I came to the part where it's a series... I'm glad you enjoyed it immensely but now I have to research what the first one is!

I know what you mean about books in a series - frustrating, isn't it?! But it sounds like this one was a great read anyway.