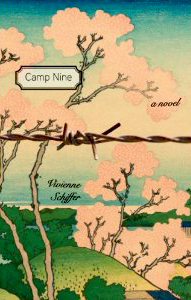 On February 19, 1942, President Franklin D. Roosevelt signed Executive Order 9066, authorizing the military to ban anyone from certain areas of the country, with primary focus on the West Coast.  Eventually the order was used to relocate 120,000 people of Japanese descent to internment camps such as the Rohwer Relocation Center in remote Desha County, Arkansas.

This time of fear and prejudice (the U.S. government formally apologized for the relocations in 1982) and the Arkansas Delta are the setting for Camp Nine.  The novel's narrator, Chess Morton, lives in tiny Rook, Arkansas.  Her days are quiet and secluded until the appearance of a relocation center built for what was in effect the imprisonment of thousands of Japanese Americans.

Chess's life becomes intertwined with those of two young internees and an American soldier mysteriously connected to her mother's past.  As Chess watches the struggles and the triumphs of these strangers and see her mother seek justice for these people who came briefly and involuntarily to call the Arkansas Delta their home, she discovers surprising and disturbing truths about her family's painful past.

For some strange reason, I've been reading a lot of books this year that relates a story during World War II.  I've never been a big fan of war history or that particular time period, so I have found it all that more curious that I seem to be reading everything that comes my way that deals with that era of history.  They have for the most part been nonfiction and the few fiction books have been mysteries or Gothic that just happens to be set during that period.  Up until this point, I hadn't read a fiction books that needs to be set in that period in order for the story to work.  Camp Nine is the first one and if they are all like this one, I have a very busy life ahead of me.  For me this book wasn't about the history, though it played a huge part, it was more about the story itself.

Now while this book does deal with race, class, and the societal structures of the day, that's not what I focused on as I was reading it.  Those elements needed to be there in order for the story to progress, but I couldn't take my mind off the characters long enough to really analyze the rest of it.  This experience was all about some of the most wonderful characters I have had the pleasure of discovering in a long time.

The action revolves around Chess and her mother from the beginning and it never leaves them as the other characters are introduced.  The way they interact with one particular family in the internment camp, the Matsui family, made me feel hope and relief that there may still be people who are willing to fight for what's right and just, even if it's only in the smallest way.  They, despite their faults and blindness to other issues, do what they can to make the lives of those in the camps a little better and develop close friendships with some of them.  I can't even start to explain the richness of all the other characters as they bought in their voices and stories to the tale.  These will a cast of extraordinary people that I don't think I will forget for a very long time.

But the one character that set this book apart from a lot of others, was the place.  The land became the most important character as it dictated so many of the relationships between the human characters.  The land controlled the fates of those who owned and those who worked.  It gave some riches and caused others to be little more than serfs of those who owned the land.  It was the canvas that gave life to all those who lived on it and it wouldn't hesitate to take it all back.  It was a living, breathing entity that provided a lush and rich background for the dynamic relationships that I found so much pleasure in.

I would like to thank Trish of TLC Book Tours for the opportunity to read/review this book.  Please visit the tour page to read other reviews as they are posted.

Sounds like the author did a stellar job of using history to accent her story, not prop it up. So glad you liked the book! Thanks for being on the tour.

Sounds like it was a really well written book. Isn't it funny how sometimes a time period gets stuck in your reading even if it wasn't your original intention?

Ryan, I can't thank you enough for reading Camp Nine and spending time with these characters that are so close to me. Thank you for your wonderful words, and I hope to bring you another story about the Delta soon. Vivienne Schiffer

Sounds like a fine book Ryan. I am in a WWII phase, actually has been for years but I read a lot of other stuff as well.

I have also had a fair amount of books set in the WWI and II periods of late. This is a new one for me.

Great review! I'm not a big fan of WWII books, but your review makes me want to read this one!

This one sounds like it needs to be read...wonderful review. I'm adding it to my list right now!

I'm actually really happy to hear attention is (finally!) being paid to the Americans who were incarcerated in the internment camps during WWII. It was racial profiling and an injustice that never should have happened and little better than what the Nazis were doing in Europe.

So THANK YOU for helping give this book more well-needed attention. I'm definitely going to be reading this one!

I've long had an interest in this period and setting as my Great uncle was a Japanese POW working on the Burma railway.
Fantastic review Ryan, I love how you comment on the land being such an important character. This is definitely going on my wishlist!

I appreciate what you've said about the setting being so important to you in your reading of this novel; I can certainly see how that might be the case -- parts of it really leapt out for me, too -- but I was also struck by the sense of the universals of the story because such atrocities unfolded in so many places, and I had a strong sense of that while reading too.

I'm so behind in my reader (so sorry I'm so late in commenting) but I wanted to thank you for bringing this book to my attention. I can't wait to read it!