Two For Sorrow by Nicola Upson 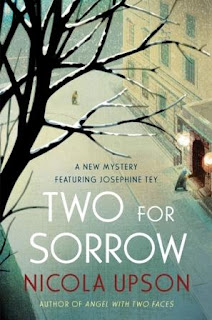 They were the most horrific crimes of a new century:  the murders of newborn innocents for which to British women were hanged at Holloway Prison in 1903.  Decades later, mystery writer Josephine Tey has decided to write a novel based on Amelia Sachs and Annie Walters, the notorious "Finchley baby farmers," unaware that her research will entangle her in the desperate hunt of a modern-day killer.

A young seamstress - an ex-convict determined to reform - has been found brutally slain in the studio of Tey's friends, the Motley sisters, amid preparations for a star-studded charity gala.  Despite initial appearances, Inspector Archie Penrose is not convinced this murder is the result of a long-standing domestic feud - and a horrific accident involving a second young woman soon after supports his convictions.  Now he and his friend Josephine must unmake a sadistic killer before more blood flows - as the repercussions of unthinkable crimes of the past reach out to destroy those left behind long after justice has been served.

I'm always a little hesitant when an author takes a real life person and puts them into a work of fiction, especially a mystery.  I'm even more suspicious when that real life person is herself a mystery author.  I have never read anything that Josephine Tey has written, but a lot of my friends (who's opinions I trust) tell me she is absolutely fabulous.

I'm going to be honest now, despite my reservations, I agreed to review this based off of two things.  First, I fell in love with the synopsis.  Ever since I read 31 Bond Street, I've been looking for well written fiction that deals with an actual crime.  Second, I loved the cover.  It is one of the loveliest I've seen in a long time.  Once I got the book in the mail, the cover was an even bigger treat than I at first thought.  There is a texture to it, as if the real paint had been used to do the illustrations, book by book.  I can't tell you how many times I would just run my hand along the cover as I was reading.  I have never thanked a cover illustrator before, but I think Mick Wiggins did a wonderful job.

Much like with 31 Bond Street, I thought this author did a really wonderful job researching the actual crime involved and making the story come to life on the page.  I almost think it's harder to include a real case into a work of fiction than it is to make something up.  The author has to craft their story around something that they have no control of, instead of taking an event and being able to play with the details in order to tell the story they want to put out there for the reader.  Two For Sorrow is a perfect example of an author crafting a story around a real life event and doing it in such away that there are no seams or imperfections between what's real and imagined.  What was brilliant about it was that while Amelia and Annie play a role in the book, through reading excerpts of the novel that Josephine is writing, they only color what's going on in the present time, they are not the focus.

I also enjoyed the way Nicola Upson brought to life Josephine Tey and her world in London in the early part of the twentieth century.  Josephine Tey became a real person to me, not just a mystery author I've been meaning to read.  Her life and personality came off the page in such a way that if I find out that she wasn't like this in real life, I may be a bit disappointed.  What I did not know until this book, and I did confirm it through other sources, was that Josephine Tey was either gay or at the minimum bisexual.  The way the subject was treated was rather intriguing to me.  It seemed as if lesbianism (no real idea of how gay men were treated) was almost accepted, if not in general society, than in the world that Josephine Tey and her friends inhabited.  It was part of who she was and doesn't seem to have been an issue, at least not in the fictional side of her.  It's made me want to know, not only more about Josephine Tey, but about history of gay men and lesbians during that time in history.

The story itself was wonderfully engaging.  It didn't move at lightning speed the way I'm used to with most mysteries.  Instead it meandered along between the past and present, following it's own course.  It kept me wanting more.  I wanted to know who the person was that could perform such a viscous, violent act against the young seamstress as she was preparing to finish a cape late at night.  I wanted the guilty party to be punished for their extreme crimes.  But even more than that, I wanted to be there.  I wanted to be part of the story.  I wanted to help Josephine and Archie figure out what happened.  It's been a while since I've read a story that drew me in so much, that I wanted to be part of it.  I wanted to get to know the characters and live in their world.  I just hope it's an experience that keeps happening to me, just on a more regular basis.

I would like to thank Trish of TLC Book Tours for the opportunity to read and review this book.  I would encourage you to visit the tour page to read other reviews.

This isn't the kind of book that I would normally read but your review makes me want to give it a try. And I agree about the cover, it really is lovely.

The synopsis grabbed my attention right away, too. And your review makes me want to read this book even more! Here's a tease for my current read.

Oh, I know exactly what you mean about a good cover like that! I'm glad to see the inside of the book lived up to the outside. I love works of fiction that are based on fact.

This sounds great! I loved 31 Bond Street too, and any historical fiction based on real people and events is usually something I am interested in. This one is definitely going on my wishlist.

I didn't read your review too closely because this is the only one of Upson's series that I haven't read yet. I wish there weren't so many TBR books ahead of it....

Glad you enjoyed this--and per your comment on my Top Ten--you really should try a Josephine Tey mystery. I love most of her books.

It's tricky to work real people into fictional stories so I'm glad that the book turned out to be better than you thought it might!

My library has this book! I can't wait to read it. I have read Josephine Tey and greatly enjoy her books. And this cover is beautiful, covers really have the power to make you want to read a book. It's kinda like landscaping around a house.

Like you, I'm a little uncertain when it comes to novels based on the lives of real people but the plot itself sounds fascinating and really quite exciting and thrilling. Loving your review.

This sounds like my kind of book. Not sure about the based on a real person bit, but besides that I can't wait to read it!

Sounds quite involved and layered, right up my alley. I'm usually not a fan of having real characters play a part in fiction but I have yet to really read much of that.