The Street of Seven Stars by Mary Roberts Rinehart 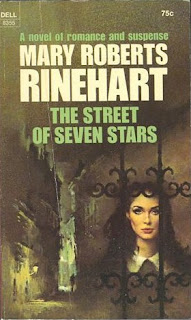 Harmony Wells came to Vienna to pursue her career as a concert violinist.  Instead the beautiful young American girl found herself playing a part in a strange concert of evil when she moved into the old mansion on the Street of Seven Stars.

In this house of intrigue, a sophisticated older woman, a charming, sinister man of the world, and a handsome, reckless young doctor each had plans for her. Yet whose lead should Harmony follow as she was whirled into a mad dance of passion and betrayal, and the throbbing heartbeat of love was drowned in the terrifying dissonance of danger?...

LOL.....I'm just laughing over the synopsis, sorry, I won't do it again.  I love the way these older books used a few well written paragraphs to grab your attention and demand that you read the book.  This one is a perfect example of a cleverly written, over the top synopsis that just won't let me go.  Anytime I read something like this, sometimes to my detriment, I end up snatching the book up and diving into it's pages.  The fact that this was a Mary Roberts Rinehart book, sealed the deal.

By now, you probably already know that I'm obsessed with her work.  She is quickly taking a seat right next to Agatha Christie in my love of a good mystery.  There is something so wonderfully lush about her narrative style that I get transfixed by what is taking place on the page.  The plots and characters are so cleverly written and thought out, that I can't help but fall in love every time I crack open the pages.

When I first picked this one up, I assumed that it was another one of her mysteries.  After I got past the half way point, I realized I had been duped by the synopsis and the cover.  This wasn't a mystery at all, it was a gothic romance.  I will admit that I was a bit miffed at first.  I felt cheated somehow, as if I was offered a gourmet, seven course meal, only to find out I would only get to enjoy the first three courses.  I actually put the book down for a few hours, stewing in my disappointment.

Soon after, I had a strange nagging sensation that would not leave me alone.  There was a voice in my head screaming at me to finish the story of Harmony and her young doctor, Peter Byrne.  Every time I glance at the cover, I felt Harmony's eyes boring into my brain, demanding that I pick her up and find out how everything ends.  Once I relented and dug back in, I was hooked.  I had to know if Harmony and Peter would be able to work past all the obstacles thrown in their way.  I had to know if Dr. Anna Gates would continue to live with them or be forced to go back to the U.S. to take care of her dying father.  I had to know if Jimmy, the young boy dying of myocarditis, would live or succumb to his illness.  I even had to know if  Stewart would keep treating Marie so shabbily, and if he did, what she would be driven to do.

As you can tell, there are some wonderful side story lines going on in this one.  Each of which is just as well crafted and detailed, down to the smallest emotional nuance.  I also enjoyed how the author used the characters to explore societal morals and standards.  There is a small American colony in Vienna, most of them known to each other, so when our heroes don't quite match up to what is "morally" acceptable living, the ramifications are used to further muck things up for both Harmony and Peter, though Harmony seems to take the brunt of it.

Rinehart did not let me down on the suspense part either, though it did take a backseat to the overall story.  There is an international spy who not only has a crush on Harmony, but is eventually arrested and condemned to death.  There is also an attempted murder via a branch thrown in the way of a fast moving, down hill sleigh.  The attempt is born out of jealously and despair, instead of malice or evil.  The suspense nuggets weren't much, but they were enough, especially considering the overall tone of the book.  I don't think I ever understood the term gothic romance until I read this book.  I love the atmosphere she creates for the characters to envelop themselves in.  Other than the lack of someone being murdered, I felt as if I was on the tip of my toes the entire time.  I was tense while I was reading this, but it was that wonderful tension that forced me to continue until the end.

I think I've read this book! Or at the very least a book with a similar cover. :P It definitely sounds like something I'd pick up just because the synopsis and cover are hi-larious.

When I saw that title in my Reader, I knew it was on your blog! You've gotta love the covers on those older books. You've made me curious about Rinehart's work.

I'm very taken with the "strange concert of evil" part. A synopsis like that does demand to be read. And gothic romances are right up my alley, Ryan, as I'm a longtime fan of Victoria Holt.

I LOVE those synopsis (es?) Ryan. Too melodramatic for words. Ha.

I didn't even know that Rinehart wrote gothics. Go figure.

I love that you've become obsessed. My bad. :)

Love the synopsis! Sorry you felt duped, but glad that you gave it another chance and enjoyed it!

Another great review of Rinehart. I like how she's quickly becoming your favorite and intrigued as to why she never really made it big like Christie. You've certainly made me curious enough to want to read her works!

Did you know that Amazon has a bunch of her books free for Kindle??? Which one was your favorite to-date?


Over-the-top book blurb aside, I haven't actually read anything by Rinehart before, but this looks pretty interesting. "Gothic" and "House of Intrigue" are pretty much guaranteed to catch my interest, so I think I'll be checking this one out. Thanks for the rec!