Believing Is Seeing by Errol Morris 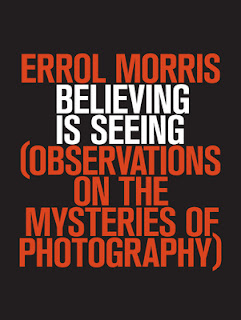 Part Of Synopsis From Dust Jacket:

In Believing Is Seeing, Academy Award-winning director Errol Morris turns his eye to the nature of truth in photography.  In his inimitable style, Morris untangles the mysteries behind an eclectic range of documentary photographs, from the ambrotype of three children found clasped in the hands of an unknown soldier at Gettysburg to the indelible portraits of the WPA photography project.  Each essay in the book presents the reader with a conundrum, and investigates the relationship between photographs and the real world they supposedly record.

It's rare that I can read a book of essays and not find one of them boring. In an ordinary collection, at least one will be about something Ihave absolutely dull and am forced to either finish reading it, or miss out on something I could learn from.  Thankfully with Believing Is Seeing, documentary film maker, Errol Morris, has managed to write 4 lively and interesting essays into an aspect of photography I've never really thought about before.

In these essays he examines the nature and history of documentary photography and the way it can be used to not only create a memorable image, but to create a flas image and a false reaction in the viewer as well.  Through an exhausting amount of time researching and interviewing, he takes on the enormous taks of not only looking at why a particular picture is taken, but how it was taken.  He delves into the minutae of whether or not a picture was staged and if it was, how it was achieved.  Thankfully, he doesn't stop his examination there.  He also chose to investigate the motivations behind and the fallout after the fact.  Does it really matter if a cow skull is moved around if it get the same point across?  Does a picture have to be staged to create a false impression?  Does the way a photographer frames and edits alter the image itself?

In "Abu Ghraib Essays (Photographs Reveal And Conceal)" he examines two photographs that I think we would all recognize.  The first is of a hooded man standing on a box, hooked up to what appears to be wires.  The man is being tortured and it's hard not to have an initial reaction to it.  What I did not know before reading this book was that the man has been positively identified, but also had a different man claiming to be him.  Morris examines the backround of the story and hwo the fact a man falesly came forward changed the dynamic of hte story and the photograph itself.  Does this false claim make the horrow of any less impactful?  Does he hurt the cause of justice for the other victims of Abu Ghraib?  Does the fact that he may have truly believed he was the man in the picture, matter at all?

The second photograph examined in this essay is the infamous one of MP Sabrina Harman posing with a dead prisoner, giving the thumbs up sign.  When I first saw the photograph, I was appalled by the image.  In my gut, I was horrified and embarrased that a fellow American, a soldier, was appearing to be so callous in the face of a horrific death.  I'm grateful that Morris chose this photograph to delve into.  He not only examined the motivations of Sabrina Harman, but he looked into the backstory of the events that lead up to the photograph.  I still have a visceral reaction when I look at the picture, but I'm no longer judging the young soldier pictured in it.  If this essay taught me anything, I learned that without knowing the context of a picture, there is no way to get the whole story.

I would like to thank Trish of TLC Book Tours for the opportunity to read/review this book.  Please visit the  tour page for additional reviews.

That does sound fascinating. I feel horror when I see those two pictures too.

This sounds like a fascinating book. I'd love to read it and find out some of the back stories behind those pictures that you mention.
Unfortunately, those of us in Israel are familiar with the ways photographs can be used to manipulate viewers and misconstrue the truth since it's done quite often by the media. In one famous case, several years ago, the BBC and Yahoo news posted pictures of an Israeli soldier pointing a gun at an injured teenage boy, making it look like he was about to shoot. But that boy was actually a Jewish yeshiva boy who the soldier (who had a gun strapped on his back) was helping to stand up. Sadly this happens quite often and most people don't bother finding out the truth behind the images. (sorry for going on a bit of rant, but it's a sore subject)

I'm very interested in this subject matter. In fact I read a fictional exploration of journalistic photographs in The Painter of Battles by Perez Reverte which made me re-examine some very famous, iconic photographs.

Hi Ryan! I came over from Smash's blog to stalk you a bit since Steph says you are nothing short of amaaaazing!!

I'm from KS too! Win! Don't tell anyone though... I maintain that I'm from Oz and live in castle guarded by flamingos! *gasp* no! The zombies don't bother them!!!

Context is so vital to understanding the "truth" of a photos but so often we don't have that context. I definitely need to get my hands on this book!