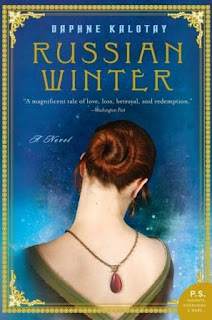 When Nina Revskaya puts her remarkable jewelry collection up for auction, the former Bolshoi Ballet star finds herself overwhelmed by memories of her homeland, and of the events, both glorious and heartbreaking, that changed her life half a century earlier. It was in Russia that she discovered the magic of dance and fell in love, and where, faced with Stalinist aggression, a terrible discovery incited a deadly act of betrayal—and an ingenious escape to the West.

Nina has kept her secrets for half a lifetime. But now Drew Brooks, an inquisitive associate at a Boston auction house, and Grigori Solodin, a professor who believes Nina’s jewels hold the key to unlocking his past, begin to unravel her story—setting in motion a series of revelations that will have life-altering consequences for them all.

When I first started this book I was expecting to read just another typical blend of historical and modern day fiction.  The second part I normally don't have a problem with, it's the first part that has been rather hit or miss for me.  There is just something about the genre that for whatever reason I normally don't connect with.   There have been a few exceptions to that, but they have been few and far in between.  Luckily, this was one of those exceptions.  Actually, the historical flashbacks actually felt more real to me than the modern storyline.

There was something so breathtakingly beautiful about Nina's story in a Russia ruled by Stalin.  From the time she was a child she was taught to believe one thing about her country and the life she would live.  What she didn't know, and what she wouldn't know for years to come, was the truth.  That her life and those of her friends were in constant danger unless they toed the party line.

Her life in the ballet and with her husband, the poet Viktor Elsin, is told through flashbacks as she is preparing to auction off her jewelery collection.  She is forced, almost against her will, to relive certain moments of her life that are both joyous and painful.  For years she has tried so hard to hide from a perceived betrayal that has been eating at her since it first entered her head.  She slowly comes to the realization that secrets destroy on their own.  That once you hold something inside for so long, it becomes more painful than the initial hurt.

There was nothing about this book I didn't like.  The characters were vivid and seemed to be almost real, despite my knowing this was fiction.  I actually wanted to google Nina Revskaya and see if I could find any videos of her dancing across the stage.  I wanted to read the poems of Viktor Elsin and find the emotion in them.  The settings were almost tactile in the realness.  I could smell the dressing room as Nina and her friends would get ready to dance as if their lives depended on it.  I could hear the music as she dances across the stage.  Everything was real and assaulted my senses in ways that many books are never able to do.

I would like to thank Trish of TLC Book Tours for the opportunity to read/review this one.  Please visit the tour page to read other opinions on it.
Posted by Ryan at 12:05 AM

Sadly, I have to admit to wanting to read this because of the gorgeous cover! But it also sounds like a great book...I do love my historicals. I know for it to impress someone that normally is not a big reader of historicals that it must be good. Great review, Ryan!

I also enjoyed this one-- I was impressed by the interweaving of the modern and historical sections, and by the slow reveal of the historical mystery that wasn't understood by any one person, even after the fact.

Everyone has seemed to love this book. It's on my TO BUY Kindle list...nice review.

I just read this book as well and really liked it. I read it for the One, Two Theme Challenge (one of my themes is dance). I thought the story was interesting and well told, the characters were fascinating, and I got a great image of Russia under Stalin

Great review Ryan. I enjoyed this one as well (my post will be up next week). I was actually surprised that I enjoyed the book because I'm neither a ballet nor a poetry fan.

I love when a book manages to surround you and appeal to all the senses. This one sounds so good and I love the ballet aspect. Fantastic review!

You explain it well, Ryan. I'm glad you enjoyed it so much. :)

"There was nothing about this book I didn't like." Wow, that's simply amazing. I'm SO glad you loved it! I'm fascinated with Soviet era history (I studied it in college) so I was already interested in this book ... now it is a MUST read for me.

I loved this book as well. The historical part was exceptional, but the characters, especially Nina, haunted me.