The Raising by Laura Kasischke 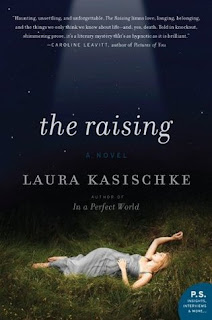 Last year Godwin Honors Hall was draped in black. The university was mourning the loss of one of its own: Nicole Werner, a blond, beautiful, straight-A sorority sister tragically killed in a car accident that left her boyfriend, who was driving, remarkably—some say suspiciously—unscathed.


Although a year has passed, as winter begins and the nights darken, obsession with Nicole and her death reignites: She was so pretty. So sweet-tempered. So innocent. Too young to die.

Because rumor has it that she’s back.

You know that feeling, when you are sitting at your computer and you have nothing.  You have no idea how to even start the review or what you are going to say once you do start typing, this feeling sucks.  I want to try and write a positive review, but I just can't do it.  I can't really write a negative review either because I didn't dislike the book, so I'm kind of stuck in the middle.  This review is going to be short and rather indifferent.

I totally understand why people would like this book.  It has interesting characters that are going through a rather trying time in their lives.  The death of Nicole has some rather lasting ramifications for her boyfriend, her boyfriend's roommate, and two different faculty members.  It's an intricate plot that twists and weaves without getting too complicated.  That's about all I can say about it.

My problem is that despite what could have been a story that kept me glued to the page, it left me feeling a little deflated instead.  There was nothing really wrong with it for me, but it didn't leave me with a positive impression either.  I can't even say that it was fun to read.  Instead, I just have to say, it was forgettable the entire time I was reading it.  I could blame it on my being in the wrong frame of mind, that may be the case.  I don't think it was though.  For what ever reason, I just could not connect with this one.

With all that being said, I really do think most people would like it.  So I don't want to discourage anyone from reading this one if you were already planning on reading it.  Try it out for yourself, I think most of you will end up liking it.

I would like to thank Trish from TLC Book Tours for the opportunity to read/review this book.  To read other (mostly positive) reviews of The Raising,  please visit the tour page.
Posted by Ryan at 6:12 PM

The reviews I've read for this one have been mixed, so I don't think you're alone in your feelings. I'm not sure the book is for me.

I'm with you..forgettable. I really wanted to like it also, especially to support a Michigan author but I was sorely disappointed in it all the way around!

I really wasn't interested in reading this one, so no worries. I do hate when a book affects me the way this one affected you. I have to light a fire under my a** just to write a review on a book I loved so one like this is excruciating! LOL! I'm such a procrastinator. =O)

"You know that feeling, when you are sitting at your computer and you have nothing." - Oh, gosh, yeah that has happened to me often. I'm glad that you were able to articulate your dissatisfaction with the book - and very well too.

I congratulate you on continuing to read, Ryan, if it affected you this way. I'm not one for finishing books I'm not enjoying. But it's hard, I know, when someone sends you a book for review.

By the same token: No two people read the same book. Emerson was right.

So many books fall in that "forgettable" range. Thanks for the honesty.

I've had that feeling with a book. Oh I loved the writing but I just couldn't connect with the characters. It was just so odd. Still, I think you did an outstanding job of doing this review.

It's always so hard when you feel indifferent. i felt the same way almost. I didn't NOT like it but i didn't LOVE it. I couldn't really put my finger on it so I gave it a recommended read. You are right, some people will like this. I still feel it should have been 200 pages shorter, atleast.

I hate when I just can't get into a book but have committed to reading it so I feel like I have to. That is why I've taken on so many fewer review books, I don't want to let someone down. Hope you enjoy your next read more!

It's hard to write reviews for "meh" books. The plot sounds very familiar, maybe that's why it wasn't so good.

I'm sorry this one wasn't as good as you'd hoped, but thanks for being on the tour anyway. :) Hope you're next read is a bit better!

I hate books that leave you stale and without a thing to say. Especially when you know you didn't necessarily *hate* it, you just don't know what to say.

What a shame. :S Hopefully the next one'll be better. :)