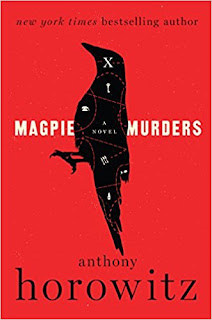 Alan Conway is a bestselling crime writer. His editor, Susan Ryeland, has worked with him for years, and she's intimately familiar with his detective, Atticus Pünd, who solves mysteries disturbing sleepy English villages. Alan's traditional formula pays homage to queens of classic British crime such as Agatha Christie and Dorothy Sayers. It's proved hugely successful. So successful that Susan must continue to put up with his troubling behavior if she wants to keep her job.

When Susan recieves Alan's latest manuscript, in which Atticus Pünd investigates a murder at Pye Hall, and English manor house, she has no reason to think it will be any different from the others. There will be dead bodies, a cast of intriguing suspects, and plenty of red herrings and clues. But the more Susan reads, the more she realizes that there's another story hidden in the pages of the manuscript-one of ambition, jealousy, and greed-and that soon it will lead to murder.

I don't remember when I received my first love letter. Truthfully, I don't even remember who gave it to me. Despite my failing memory, I remember how it made me feel. That tingly, warm sensation I felt deep in my gut before it washed over my entire body, leaving me feeling giddy and on top of the world. It's the same way I've felt the two times I've found myself falling in love. It's a heady experience that left me feeling invincible, that I could do anything and be everything the other person needed. If I was a Golden Age mystery author, or even one of their fictional creations come to life, Magpie Murders would have left me feeling the exact same way. This is a love letter to a genre, and an era, that Mr. Horowitz so obviously loves.

There is precious little I can divulge in regards to the story or characters you will meet in the pages of this tome,  simply because I don't want to spoil even a second of your own experience once you get started on this. This is one of those books, Gillespie and I by Jane Harris being a perfect example, that I will simply implore you to read it. If you need me to beg, I will. I'll even consider bribery, depending on your price. Tell me what I need to do, and I'll do it. I swear on everything I hold precious in life that you won't be disappointed. This is a pastiche that puts all others to shame.

I just need to figure out a good enough bribe to get Mr. Horowitz to actually write a few Atticus Pünd books, because that section of Magpie Murders is unadulterated perfection.
Posted by Ryan at 11:59 PM

Wow, that is high praise and means a lot coming from you because of how much you read that genre.