Three Ex-Boyfriends & The Books They Made Me Love 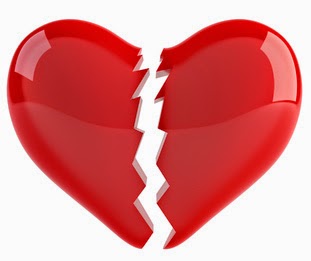 For the most part, a lot of us think of ex-boyfriends (or ex-girlfriends) in a rather negative light. For whatever reason, they are the ones we invited into our lives, only to have them leave on a negative note.  There may have been something horribly wrong in the relationship, or that spark may have just fizzled out.  In a lot of my past relationships, it was the timing of the whole thing that was a huge factor.  I've dated some great guys, just one of us would not be ready for a serious relationship. No matter the reason it didn't work out, most of us don't like think of our past relationships.  They tend to be examples of failure, and failure never feels good.

I would like to think I've taken something positive out of every relationship I've been in, no matter how disastrous they turned out to be.  From Andrew, I learned to love Dos Equis Amber, and it's still the only beer I will drink.  From Alberto, I learned how to recognize my limitations, and not to try and push myself into accepting things I'm not willing to deal with. From Joel, I learned to love Shania Twain, and that I won't put with the silent treatment.  From Martin, I learned that I don't have infinite patience and expecting a different result with the same factors in place, is a dumb idea.  And from some of my ex-boyfriends, while the love may not have lasted between us, assuming it was there to begin with, I did leave the relationship with a new love.  Some of those relationships exposed me to new books, and authors, I've grown to cherish over the years. 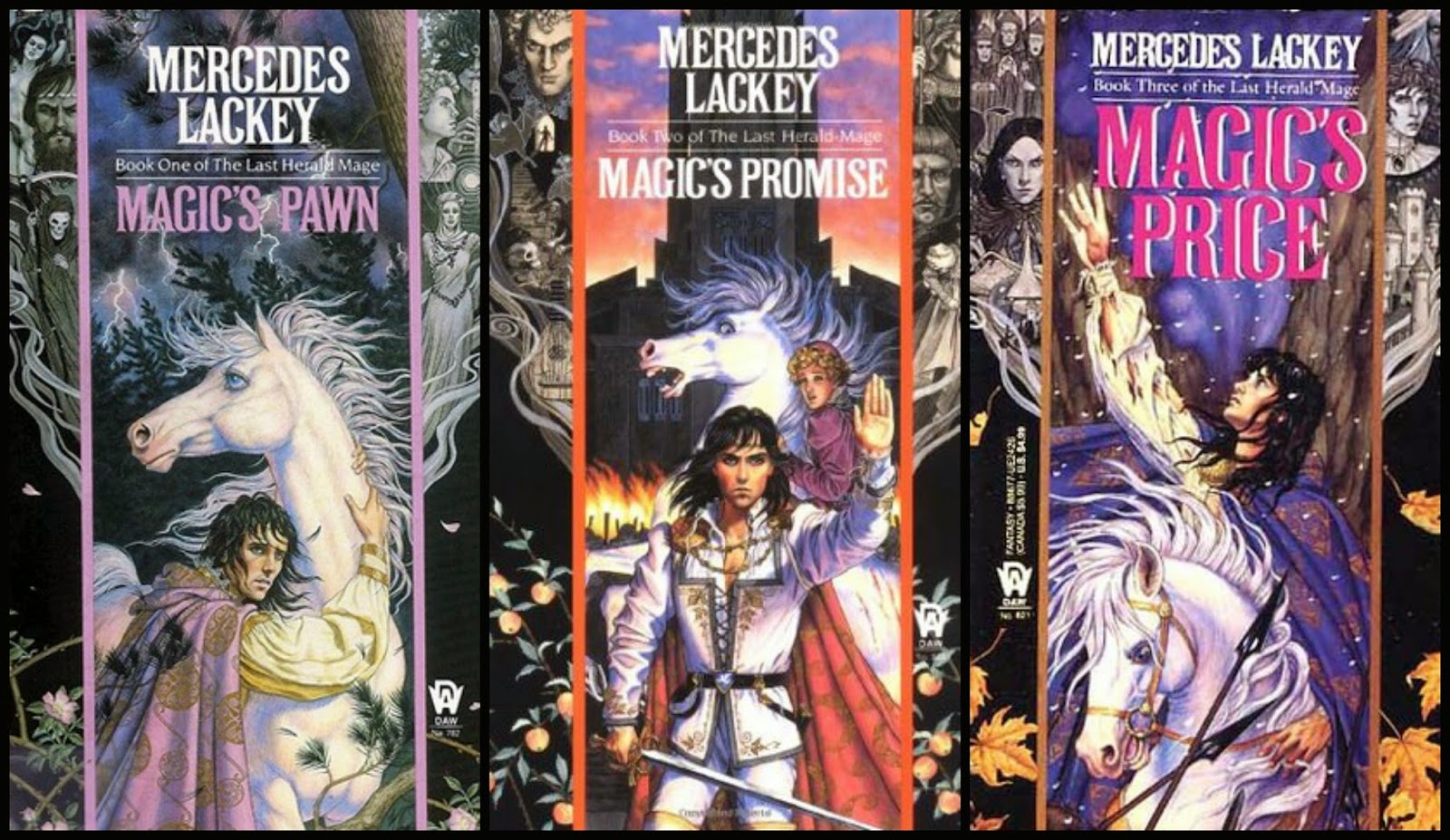 My relationship with Vincent was doomed from the start.  I got sucked in the night my first real boyfriend, Jeremy, broke up with me.  It seemed that Jeremy was tired of sneaking around behind my back, and wanted to be able to pursue others, without it being a secret.  Vincent was a mutual acquaintance of ours, and one night at the club, it seems as if they joined forces.  Jeremy told him he was going to break up with me, and that if Vincent was interested in me, to be waiting in the wings to come swoop me up.  It was a tacky thing to do, oh lord was it tacky, but I fell for it.  I let him comfort me that night, soothe away my pain, and my first rebound relationship was born.  It didn't last very long, thank god, but I did walk away from it with my first book boyfriend, Vanyel Ashkevron.

Vincent was a huge Mercedes Lackey fan, and he kept on talking about the three books in her Last Herald Mage trilogy.  He knew I loved to read, and I think he was trying to connect with me on a more than physical level.  It wasn't long before I was in love with not only Vanyel, but with Mercedes Lackey's Valdemar series in general.  Here was a world in which men and women were called, from all corners of society, to serve their kingdom.  They sacrificed their lives in some cases to defend their realm, and they were to the one, good and honest people.  The Heralds, and Vanyel in particular, where the personifications of sacrifice and honor, and I loved them for it.

I now own 40 of her books, have read them all numerous times, and Vanyel is one of my all time favorite characters.  I try to visit with him at least once a year, though blogging has made rereading a little more difficult than it used to be. 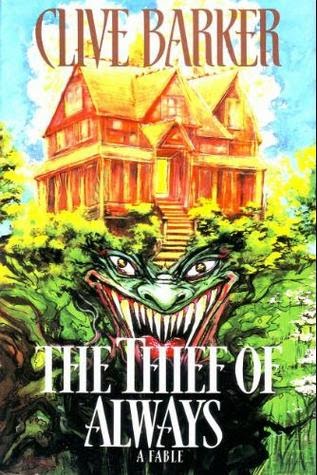 Derek was my first kiss and first, well you don't need to know that part.  I met him in college, and while I can't say we ever dated, it was more than a casual hookup.  It was during the first semester of my Freshman year, and I wasn't really out to a lot of my friends on campus.  A bunch of us had gone to another town to a club that allowed anyone 18 and over to come in.  We met him there, and a bunch of us became friends.  He came down to our campus one night to hangout, and while a few of us were talking, I slipped in my coming out so smoothly, two of them didn't realize I did it for a good ten minutes.  That night I kissed a guy for the first time, and it felt like I was coming home.  Over the next two years he was a great teacher, if somewhat infrequent, and while I think we really did care about each other, the love spark never happened.   We are still friends, connected on Facebook, and I will always be grateful for making my first of everything as enjoyable as it was.

He ended up moving to Colorado, and for the longest time we kept in touch, and I actually took a trip out there for a visit one year, and that's when I was introduced to The Thief of Always by Clive Barker.  It was one of Derek's favorite books, and I was enraptured almost from the first page.  It's a modern day fable of a young boy who just isn't happy with his life.  He is bored all the time, and just knows there is something out there, something better than what he has now.  He is quickly conned into visiting a magical house where all four seasons, with the accompanying holidays, cycle throughout the day.  Little does he know that every day spent in the house, is a full year in the real world. Once he figures out something is really wrong, he does everything he can to get home.

This is another of those books that I've read multiple times, and has led me to reading Clive Barker's Abarat series as well.  I've fallen in love with the way he writes books for young adults.  They are edgy, darker in tone, and completely surreal.  I haven't read The Thief of Always since I started blogging, but I'm pretty positive it will be getting a visit this Fall. 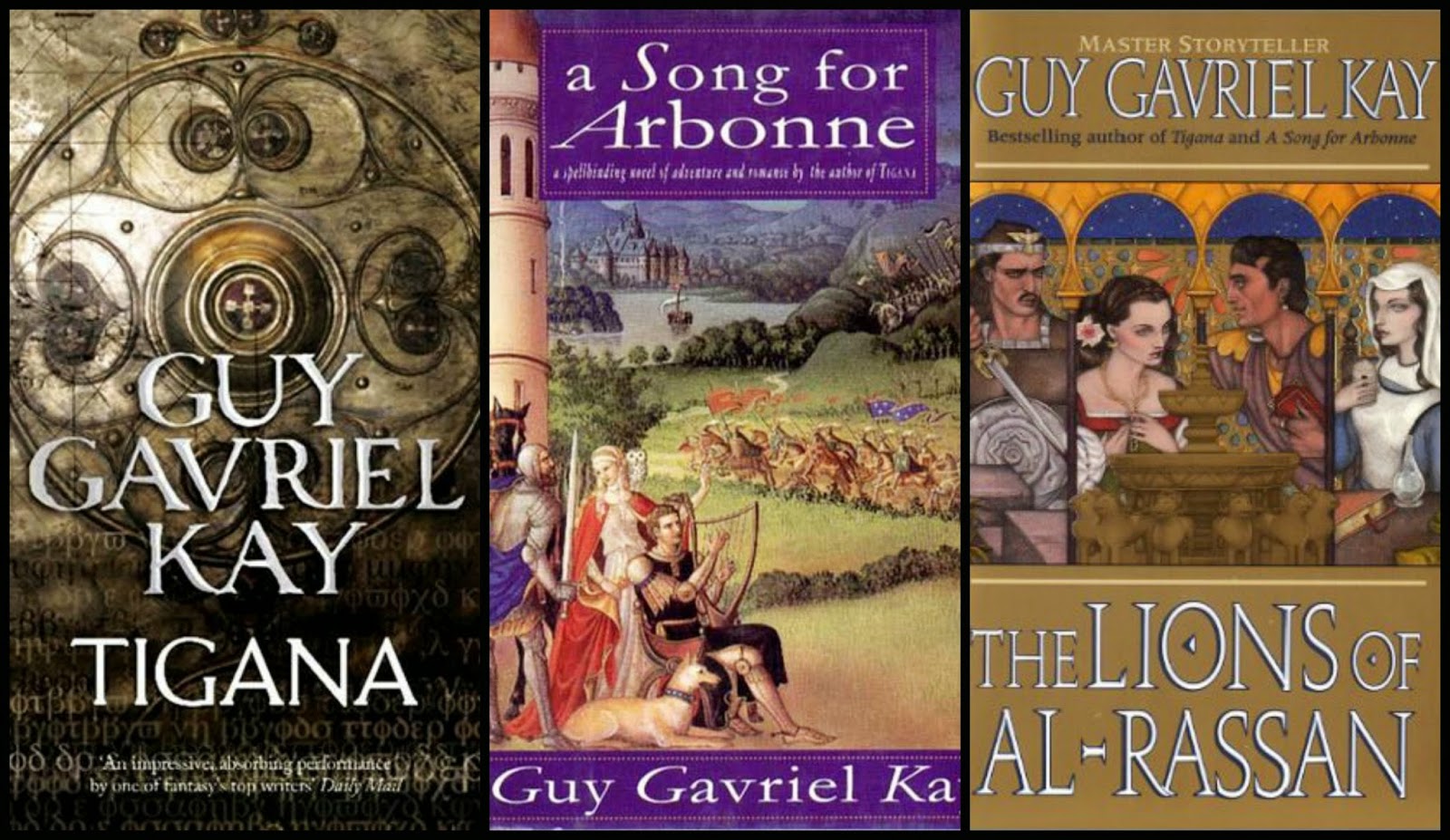 What can I say about Brent? He was slight nerdy, adorably nice, and hung up on someone else.  I'm positive this wasn't a love match for either one of us, but we enjoyed each other's company, and for the most part we had fun with it.  It was one of those relationships that just sort of fizzled out, all on it's own, and thankfully we both not only recognized it, but we were okay with it as well.  We stayed friends for a while, but life drifts people apart, and the last I knew he was living in Florida.

Brent introduced me to the books of Guy Gavriel Kay, and I owe him dinner a thousand times over for making that introduction possible.  I've had a hot/cold relationship with fantasy for a long time now, and for whatever reason, I tend to be a little picky in what I read.  I know, without a shadow of a doubt, that I can pick up any Kay book, and I will instantly fall in love with the world he created, and the inhabitants that dwell there.  There is a lyrical quality to his books that is pretty impossible to explain, but it makes his books a physical pleasure to read.  Within a few pages, I will be transported into another world, and I will never want to leave.  His writing is beautiful, and his characters are so well written, you can't imagine them not existing in real life.  He has never failed to deliver, and as I'm writing this post, I'm feeling an almost overwhelming pull to grab a few of his book off my shelves, and lose myself for the next few hours.

Email ThisBlogThis!Share to TwitterShare to FacebookShare to Pinterest
Labels: 3 Lists, My Life, Questions

What an interesting post! Have to admit that I'm a little jealous that you've had so many boyfriends who not only read, but introduced you to awesome books! Sad to say that none of my ex-boyfriends were readers. Maybe that's why they became ex's?

What a great post! I love the personal details and your perspective on relationships. I need to read something by Mercedes Lackey.

Wish you and Derek would've stayed together. Then you'd be in Colorado with me!! I really do like this post. When I was dating the boys were losers and none of them read books. Sigh. My husband reads so there's that. I introduced him to all the books though.

I need more friends that recommend good books to me :)

You've read Abarat?! I LOVE that series and it is so underappreciated. Or rather...it's simply just not read haha! I've been meaning to make it to The Thief of Always for AGES. And I also really like Mercedes Lackey's Valdemar series (although I've had some serious ups and downs with her other books) - I don't know anyone else who has read them! And I'm about to start my first Guy Gavriel Kay as soon as I finish the book I'm reading right now! I must say, your exes DO have excellent taste! I can't say that any of my exes were into books, so sadly I didn't get any of those. I DO credit pretty much all of them with introducing me to music that I like though, so I'm ok with that trade off haha. Ahhh this post made me all excitable!

Love this post Ryan and I love your attitude. I've definitely taken something positive from each of my ex's. First ex the positive was of course our children and we're still actually friends which is nice. 2nd ex the positive was that 10 years of hell was over! I learnt to listen to and trust my instincts, better late than never lol, and I learnt that it's ok to have boundaries. Funnily enough neither of them read, might account for their narrow outlook on life lol. How wonderful you have such beautiful book memories connected to past boyfriends.

Great topic! I've never actually dated anyone who read books... This might be why I've never married. Who knows?!

What a great post. I have to say that few of my exes read much. Of course, neither does my husband for that matter.

Oh damn, I never got a book love from any of my old boyfriends, the bums! I should have known to run, not walk, when it was clear that most of them didn't read for pleasure. How lucky you are to have been left with that!