The Lost Tribe of Coney Island by Claire Prentice 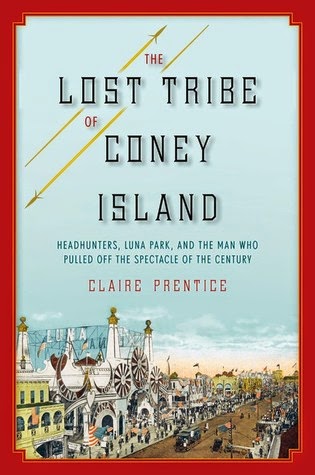 The Lost Tribe of Coney Island unearths the incredible true story of the Igorrotes, a group of "headhunting, dog-eating savages" from the Philippines, taken to New York in 1905 by the charming, opportunistic doctor-turned-showman Truman K. Hunt.  They appeared as "human exhibits" alongside the freaks and the curiosities at Coney Island's Luna Park.  Millions of fairgoers delighted in their tribal dances and rituals, near nudity, tattoos, and tales of headhunting.  The Igorrotes became a national sensation - they were written up in newspaper headlines, portrayed in cartoons, and even featured in advertising jingles, all fueled by Hunt's brilliant publicity stunts.

By the end of that first summer season at Coney, the sideshow scheme had made Hunt a rich man.  But he was also a man who liked to live large, and his fortune was dwarfed only by his ability to spend it.  Soon he would be on the run with the tribe in tow, pursued by ex-wives, creditors, and the tireless agents of American justice.

I think you guys are going to view me as slightly schizophrenic after reading my thoughts on this one.  If you have been reading the blog for any length of time, and I apologize for my absence over the last month, you guys know I'm a huge fan of nonfiction in general, and that I adore narrative nonfiction.  With all of that, you would assume that I would have loved The Lost Tribe of Coney Island.  Sadly, I didn't.

I found the subject to be fascinated, and even laughed out loud a few times as I was reading it.  I also really enjoyed the author's writing style, and her word flow.  Where my hang-up lies, is in the fact that there was almost too much of the narrative nonfiction, and not enough of a pure nonfiction vibe going on.  Now I know that won't make sense outside of my own head, and I apologize for that, but after thinking about it for a while, that's about the only way I can describe it.  In a nutshell, it read too much like a historical fiction book, and not enough like a history book.

For me, and this is about my taste, there was too much license taken with the minute details in the book.  The way someone stood, or what they were thinking or said in a particular moment, where there is really no historical data to back it up.  I'm sure it's all based on something, but it felt as if I was watching a movie based on an actual event, not a documentary.

As I said, it's all in what I look for in a nonfiction book, and I'm sure there are plenty out there that would have no issue with it.  And in all fairness, I rarely ever like a historical fiction novel, which this book reminded me of.

I would like to thank Lisa of TLC Book Tours for the opportunity to read/review this book.  Please visit the tour page to read other reviews.
Posted by Ryan at 6:54 PM

I understand what you mean perfectly. Sorry this wasn't a winner for you.

I get what you mean. I think I would feel the same way.

I've read nonfiction like this and it never quite sits well with me unless there some kind of explanation ahead of time so I know how the conjecture is happening. Too bad it didn't work for you but not every book can.