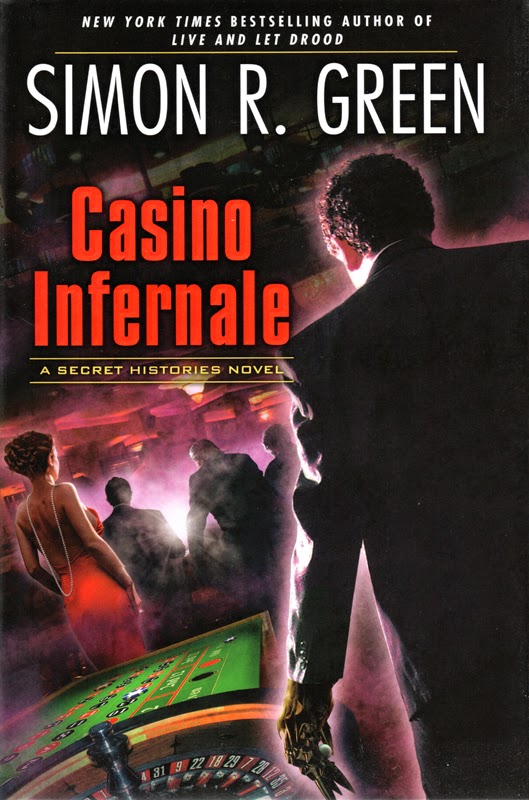 My name is Drood.  Eddie Drood, aka Shaman Bond.  For generations my family has protected you ordinary mortals against things that lurk in the darkness, just out of sight, but not at all out of mind.

Unfortunately, I've had a falling out with my near and dear (some of who were trying to kill me), so my true love and powerful witch, Molly Metcalf, and I are now in the employ of the Department of the Uncanny.  We've been given an Extremely Important Assignment: Attend Casino Infernale, and annual event held by the Shadow Bank, financiers of all global supernatural crime.  Our mission: Rig the game and bring down the Shadow Bank.

But as Casino Infernale, the stakes are high indeed - winner takes all, and losers give up their souls...

You have to love a book that plays off the James Bond theme, as often as it can, plus includes dinosaur riding Nazis, an entire race of people who remind me of Oompa Loompas (but better), inter dimensional travel, a sentient car, a game that reminds me of Merlin's battle with Madam Mim, evil banks, parent's who gamble with their son's soul, trips to Mars, an inheritance that can suck the world into a black hole, a giant horse god out for revenge, and bad guys you kinda of like.  And when I mean bad guys I like, I'm really referring to the Grey Bastards.

To explain the Grey Bastards, let's just pretend that James Bond had an overly horny uncle, who also happened to be a spy.  That uncle spread his progeny all over the world, the exact numbers are really not know very well, and almost every single one of them wants to be in the Family.  They are willing to do anything to accomplish that mission, and the Family is more than willing to use them and their desire to belong.  Now they know, and the Family knows, that they, for the most part, will never be accepted, no matter what they do, but that's neither here nor there.  Almost every books has showcased one of these Grey Bastards, and poor Eddie had to kill most of them, if not all of them.  This book features two, and again, they both die.  One of them, the one I didn't like as much, was partly responsible for the death of Molly's parents, and we do find out that truth behind that whole thing in this book.  The other, sent to help Eddie and Molly in their infiltration, turns on them when he thinks they are in over their heads.  I actually liked this guy, he was a little weaselly and slimy, but he was fun.  Too bad he had to make a stupid decision in the end.

As with the rest of the books in this series, Simon R. Green pays homage to his other works, as well as sprinkles in enough pop references to appease even the pickiest of geeks.  I can only imagine, and hope, that he has as much fun writing these books, as I do reading them.  I'm already looking forward to the next one, and I'm keeping my fingers crossed, that the books have no ending.  I'll gladly devour them until the sun refuses to shine anymore, but I'm pretty sure that Eddie and his Family, will keep that from happening.

The Man With the Golden TorcDaemons Are ForeverThe Spy Who Haunted MeFrom Hell With LoveFor Heaven's Eyes OnlyLive and Let Drood
Posted by Ryan at 12:00 AM