The Unsuspected by Charlotte Armstrong 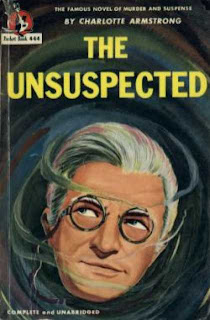 Luther Grandison, famous stage a motion picture director, is admired by thousands and loved by many.  He is also a killer - a bold, evil, merciless killer.  His quiet charm coils about those near him with silent, deadly power.

Above all, Grandison is unsuspected - unsuspected by everyone except a young man and a girl.  This is the story of their struggle to prove his guilt before it is too late.  It carries them deeper and deeper into terror, dominated by his brilliant, sinister mind.  Page by page, line by line, their tale moves to a screaming climax.

Can you believe that I never knew this book existed before a month or two ago.  I had no clue that one of my favorite Claude Rains movies happened to be based on a book.  I can't begin to tell you how often I'm surprised when I find out a movie I love, started life on the printed page.  I think that says something bad about me, but I've lived with it so long, I guess it's just time to accept it.

There is really no way for me to talk about this book without giving the whole kit and caboodle away.  I would have to explain how awesome Grandison is, and how much I envy the mind the man has, even if it's towards the pursuit of death and destruction.  I would have to explain why I think Althea (played by Audrey Totter in the movie) is one of the most interesting characters in the book, and that I'm glad she didn't share the fate her movie counterpart did.  I would need to compare and contrast the role of Jane, and how I prefer the Constance Bennett version over the book.  Then I would need to deconstruct the romance element and why I think that the way the relationship between Matilda (Joan Caulfield) and Steven Francis Howard (Ted North), progressives at a more natural level in the movie, but I prefer the book's ending.  Despite the trickery and down right lying that Steven had to do in order to get into the Grandison household, it's nice to know that faking a marriage to a dead woman, doesn't necessarily make the marriage a dead idea when the woman comes back alive.

This is another example of the issues I had with reading The Thin Man for the first time.  I love the movie so much, it's hard to separate the movie from the book, and most of the time, the book is found lacking just a bit.  It goes without saying, that it normally has more to do with the actors than the storyline itself.  Though the movies does have a higher body count.

Whether you decide to read the book, watch the movie, or do both (what I think you should do), you are going to be treated to a wonderfully entertaining story of murder and deceit.  Both the author and the director are able to surround the events in a hazy cloud of suspense that you will forget you know who the bad guys are.  You won't remember until it's too late that you aren't supposed to like Grandison, that he is capable of being the unsuspected.

I think most of the best movies did start as a book. I'm not familiar with this book or the movie. :/ I love the retro cover.

looks good to me! I've did watch the movie and both the books! thanks for sharing!

hmmm...sounds good. The guy on the cover's smile somehow reminds me of Michael Douglas....LOL

I've been reading mysteries since the Nixon administration but I never read Charlotte Armstrong till this year, for this challenge. She's great at plotting.

I've never heard of the movie or the book. It does sound like I should pick it up though.

Now you've made me want to see if Netflix has this movie!!

This is one classic film I have not seen. I will definitely have to watch for it.

How funny that the guy on the front of the book looks like Rutger Hauer, albeit a younger version. I was just remarking on FB about how much I've always liked him and that I'm glad he's on True Blood this season. LOL

Another great pair: watch the movie, and read the book. I haven't read Charlotte Armstrong for a long time. I should try her books again.