A Half Forgotten Song by Katherine Webb (Giveaway Included) 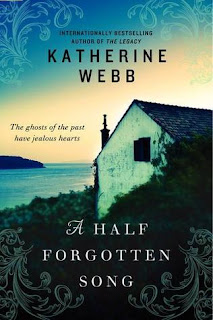 It's 1937.  In a village on the Dorset coast, fourteen-year-old Mitzy Hatcher has endured a wild and lonely upbringing, until the arrival of renowned artist Charles Aubrey - along with his exotic mistress and their daughters - changes everything.  Over the next three summers, Mitzy sees a future she had never thought possible, and a powerful love is kindled in her.  A love that grows from innocence to obsession, from childish infatuation to something far more complex.  Years later, a young man in an art gallery looks at a hastily drawn portrait and wonders at its intensity.  The questions he asks lead him to a Dorset village and to the truth about those fevered summers in the 1930s.

Katherine Webb is one of those authors that I first discovered in 2011 when I read her first book, The Legacy.  It didn't take me long to fall in love with the author's extraordinary talent of weaving past and present into one cohesive narrative.  With most other authors, I find myself getting distracted when a book shifts to the past, mainly because these shifts are only there to further the "current" storyline, so they aren't as well developed.  That's not the case with The Legacy or with A Half Forgotten Song.  The shifts are absolutely essential and in some ways a hell of a lot  more important than what's going on in the present.  They are the backbone of the story, not the helping hand.

If the flashbacks are the backbone of the story, then Mitzy acts as the connective tissues holding the whole thing together.  Whether we are visiting with her elderly self, listening to her version of what transpired between her and Charles Aubrey, or witnessing the events first hand as we are given a truer glimpse of what transpired during those fateful summers, Mitzy is the one who ties not only the characters together, but the it's her influence and her actions that set the entire tone of the book.  And if you are annoyed by the above sentence structure, I apologize.  Every twist and turn eventually leads right back to Mitzy and The Watch, her cottage on the coast.

Not to take this analogy even further, but if the flashbacks are the backbone and Mitzy acts as the connective tissues, then it's Zach and his search for purpose that takes the place of the neurons, spurring and charging the action forward.  I think I'm really stretching my analogy a little thin right now, but it's too late to stop now.  Zach is a young father whose marriage has fallen apart and his daughter is being taken across the Atlantic to America.  His art gallery has been hanging by the skin of it's teeth, and he is a man who for many reasons is at a crossroads in life, and all roads seem to lead to nothing.  Through an odd set of occurrences, Zach finds himself heading to the Dorset coast and the village where Mitzy and the Aubreys had their lives altered beyond belief all those years ago.

It's Zach's search for the truth behind a series of sketches by Aubrey that have been popping up on the market, and a half foggy notion of writing a book focusing on those three summers Aubrey spent in the village, that jump starts Mitzy's longing for the past, allowing us to get the truth behind what happened all those years ago.

Now forgive me if this review does not seem worthy of the book, because after reading what I've already written, I'm not sure it does.  For whatever reason, I'm having a hard time putting my thoughts and feelings into words.  I'm not finding the right way to express how much I love this books and it's characters.  Much like The Legacy, A Half Forgotten Song is about family and those connections that ties us all together, even if those connections exist only in our own heads.  It's about secrets and actions done in haste, born of strong emotions, that take upon themselves a life of their own.   But most of all, it's about the consequences, the foreseen and unimaginable, of those actions.  It's about how we deal with and internalize them, how we cope and how we hide from them, and how eventually, no matter how hard we try, how we have to face them head on and hope for the best.

I would like to thank Trish of TLC Book Tours for the opportunity to read and review this book.  Please visit the tour page to read other, hopefully more coherent reviews.

The wonderful group at TLC Book Tours have generously offered my readers the chance to win a copy of this book for themselves.  The giveaway will last until 11:59 pm, CST, on 6/27/13.  You must be a resident of the United States to enter, and all you have to do is leave me a comment with your email address.

I've never read Katherine Webb, but I love stories that are past and present. I'm very intrigued by this one and have actually a number of Webb's books on my Nook wishlist because a number of them sound so interesting!

Sounds like too good a book for summer reading, if that makes sense. One to read and savor, but not a poolside book.

I want to know the secrets of those summers.

I've never read Webb either but, boy, have you made this book sound good!

This is a new author for me to. But I like the sound of her book. It makes for an interesting read.

Ryan, I have some catching up to do, I hadn't realized you were blogging again. so happy though.

This is one I want to read as well, sounds good.

I know what you mean about not being able to find the right words - fantastic books often do that to me as well.

Thanks for being on the tour. I'm featuring your review on TLC's Facebook page today.

sounds intriguing.
thanks for the giveaway
Emma @ Words And Peace
ehc16e at yahoo dot com

I totally got what you were getting at, Ryan. This sounds like a great read. Thoughtful review, as usual.

Thanks for the chance!