Today is the last day of my vacation and knowing myself as well as I do, I will be complaining about going to work tomorrow and bored to tears with not having gone to work for 5 whole days.  I love time off.  Actually I need time off, but right around the 5th day, I start going a little wonky.  I'll probably be cleaning up a storm today, doing laundry, and getting back into work mode.  On my last day off the computer, Heather of Age 30+ ...A Lifetime of Books has graciously agreed to tell us all about her week last week.  After reading her post, I wish I was 8 years old again.  Heather is one of the nicest bloggers I have met and one that has always made me feel welcome.  She has a terrific blog and even though, as she will point out, we don't read all the same type of books, I'm always adding to my wish list after reading her reviews.  Besides, anyone that loves The Wheel of Time series as much as she does is purely fantastic. 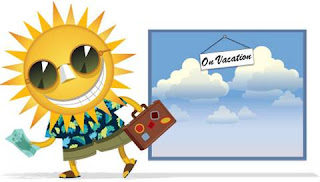 When Ryan asked me to contribute a summer-themed guest post I immediately said yes.  See, I love Ryan’s blog. We don’t read ALL the same kinds of books but there is some overlap in our reading tastes and I enjoy reading his posts.  Plus our sons are about the same age, so that’s something else we have in common.   The problem is that I didn’t know exactly what to write about – “summer-themed” is a rather broad topic.  After much thought I decided to share with you what I’ve been doing during this past week, because it has been rather interesting!
Kiddo is going into the 4th grade this year and he is a Webelos (level 1) in Cub Scouts.  For the first time since he joined Scouts our vacation schedule allowed him to attend Cub Scout Camp.  I decided to volunteer for the entire week because I’d get a huge discount on Kiddo’s registration fee.  I wasn’t particularly excited about spending 9 hours each day for 5 days in the 90 degree heat with 300 elementary aged boys, but hey, you do what you’ve gotta do, right? Turns out, this has been a FANTASTIC week for me!
Monday: All 300 boys made their way to my station during one of 8 sessions to create a themed flag for their Den.  I loved seeing how creative each group was.  Some kept up our dinosaur theme by choosing names such as “Killer Raptors” and “Mighty Megalodons” while others chose names like “The Gummies” and the “Killer Teddy Bears.” One obnoxious 7-year-old wrote “sex” on his flag not once but twice, but other than that the boys were all pretty good.

Tuesday: I helped a wildlife rescue group teach the boys about reptiles.  The highlight of my day was holding the critters: an 8’ long red-tailed boa constrictor, a 2’ long corn snake, a very smelly savannah monitor, and a rather large monkey-tailed skink (he’s the one eating from the spoon).  Apparently I smelled a lot like the salad I had for lunch because that lovely skink bit me!  It didn’t really hurt, and it only bled in one spot – I’m kind of proud of my wound.  I texted my husband to let him know about the bite but apparently auto-correct doesn’t like “skink” and changed it to “skunk.” My husband frantically called me to see if I had to go to the hospital to get a rabies shot for my “skunk” bite.  Too funny!

Wednesday & Thursday: I assisted a deaf woman in teaching all the boys basic sign language.  The first day her daughter translated since we were doing some complicated signs but the second day I was on my own (and I don’t know sign language).  I learned my ABCs in finger-spelling and also learned about 50 signs.  By the end of the second day I was able to have brief but understandable conversations with this woman. It was so much fun!

Friday: That’s tomorrow, and I have no idea what I’m doing.  Maybe I’ll be cooking, maybe I’ll be cleaning, maybe I’ll be manning the store.  It doesn’t matter what they assign me to do; I’ll do it with a smile and I’ll sure learn something new.  I really wasn’t looking forward to this week but I went in with the best attitude I could muster and I am having a blast.  Hot temperatures, high humidity, and the ever-present chance of severe thunderstorms do have me melting a bit (as you can see in the photos) but they haven’t dampened my mood.  It’s hard work and I’m exhausted at the end of the day, but this is a GREAT way to start summer. I just hope Kiddo is having as much fun at Cub Scout Camp as I am! 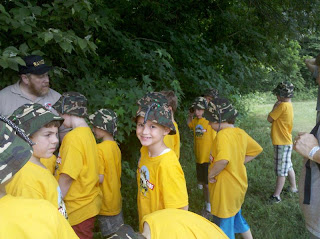 A good attitude is the key to an adventure like that and Heather certainly has one! I'm sure she was an integral part of that camp!

You wouldn't catch me near those snakes, but she's certainly a good sport!

Great summer post! It's been a while (my kiddo is 18 and now an Eagle Scout), but I used to volunteer at Cub Scout day camp too. Always a lot of fun!

That sounds like a fantastic week! It's so great when we aren't sure how something is going to go and it turns out to be a wonderful experience. And your son will know how much you love him, respect his choices in activities, and support him!

I agree that your past week was more dangerous than mine. In fact, the last time I saw a black cobra, somewhere last month when on a field survey taking GPS waypoints, I fled. That's it.

Heather is a brave, brave woman, as I don't know that I'd survive spending my week with 300 litle boys! :o

Brave is right, and what an AWESOME week you've had! I laughed out loud at the "skunk" bite. Hilarious. :D

I want to thank Heather for not only taking me back to my Cub Scout days but for sharing a week of her life on my blog. She gave me peace of mind knowing that you guys would have something great to read while I was gone on vacation.

Heather - You're an amazing mom and Kiddo is so lucky!

Heather, I think you rock!!! I don't know too many women who would rough it for a week, get bit by a skink and just be willing to get dirty. As for the Kiddo, you can bet that you have helped make this one of those memories that he'll treasure forever!

Heather - By the way, what happened on Friday!

I'm impressed with your positive attitude and how much fun you had! :) My son is going to summer camp for the first time this year and I'm not going to be there with him, so I'm trying not to be a clingy/anxious mom.

Sounds like a great week, and Heather is certainly braver than I am.

You're a better man than me, especially with the snakes. Yikes! I'm am terrified of snakes. It sounds like you had a great time and I'm sure kiddo did as well.

Ok, sorry to be so late in responding to everyone - we headed off to the beach on the same day this post went up, so I haven't had a chance to check out your comments until now.

Friday was just ok. I was in the craft area with the younger kids, and the lady running that area was rather crabby. I still had fun though! The project involved shredding soap with a cheese grater, putting it in a bag with a bit of water, and reforming it into a bar of soap with a toy inside. The kids had a lot of fun with it!

Thanks again to Ryan for inviting me to post here. Glad you all enjoyed my adventures. :)

AHHHH!!! Love the pics! :) So fun! I enjoyed reading about your adventures!