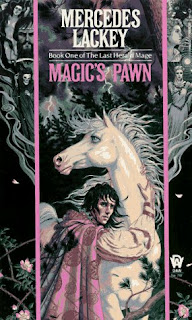 I wish there was a picture of Savil to show you but I'll have to settle for the book cover of Magic's Pawn which is the first book in The Last Herald Mage trilogy by Mercedes Lackey.  The main character of this series is Vanyel Ashkevron, who was actually the focus of my first Favorite Fictional Character post.

So for this post I wanted to talk about Savil Ashkevron, the tough Herald Mage who is Vanyel's Aunt and teacher.  Savil, who never married or had children of her own, is fiercely protective of the Herald Mage trainees who are placed into her care.  So when her overbearing brother sends her his oldest son who he can't make anything out of, Savil is at first annoyed by the intrusion of a spoiled brat into her well run home.  Throughout the course of his stay however she, with the help of her young protegee who quickly falls in love with Vanyel, begins to realize that she has a very scared and emotionally oppressed young man on her hands but doesn't really know what to do about it.

When the relationship between Vanyel and Tylendel enter into a relationship, Savil quickly learns to see what Tylendel has been seeing all along.  She shelters the two young men and gives them a sanctuary to build their relationship together.  And when that relationship ends in such a way that it leaves carnage everywhere you look, Savil steps up to save Vanyel from himself and others.

What I love about Savil the most, other than her gloriously overbearing and confident personality, is the fact that when she realized she couldn't give Vanyel what he needed to heal, she admitted defeat and took him to the people that could.  I have mad respect for anyone who understand their limitations and is able to ask for help.  For that request to come from someone who is such a strong character as Savil, makes it that much more meaningful.

Savil is that tough old broad that we all wish were in our lives.  She speaks her mind but has a mind that is worth being heard.  She gives advice, even the kind you never want to hear.  But the best part of Savil and women like her, is the fact that once they give you their loyalty and friendship, it never waivers.  Savil and all women like her will have your back and fight your fights for you if you can't.  She is a fantastic character and I just hope that everyone will discover for themselves how great she is.

Now as a side note, I will be reviewing all three books in the trilogy during the month of August for the GLBT Challenge 2010 mini challenge.  I hope that by the end of the month I will have convinced everyone to read these books and find out how great Savil and Vanyel are as characters.
Posted by Ryan at 1:19 AM

I need to read something by Lackey one of these days. I think I've said that before.

I haven't read any of her stuff either. I did get her new book last year, Gwenhwyfar: The White Spirit. My sister said it was good, but haven't had time to read it. Also, I have a book called The Burning Bright which she co-wrote with Marion Zimmer Bradley and Andre Norton. I bet it's a good read (Zimmer Bradley is one of my faves). Have you read that one?

Anyway, Savil does seem like a great character. I love strong female characters!