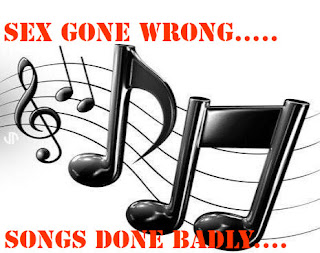 This is a contest that grew out of a discussion I was having with a few friends the other day.  After listening to Lick It from Roula in my friends car, we got into a argument about how bad the song truly is.  We all loved it when it first came out, a thousand years ago, when we were in our early 20s and going out all the time, not so much anymore.  Now I listen to it and find it horribly silly and immature.  The sadder thing for me is that with all the songs about sex, which there are thousands of, most of them are not that sexy.  A lot of them are just down right absurd.
So this is what I want to do, I want to hold a contest asking everyone what they view as the worst "sex song" ever made.  It can be done right silly to the point you can't take it seriously, written with such horrible analogies and comparisons you never want to have sex again, or just down right gross and nasty that it leaves mind numbing images in your head.  Even if it's the video that makes you blush and cringe at the same time, feel free to nominate it for that reason as well.
So Here Are The Rules:  The contest will run in two stages.  The first will be the nomination stage which will run for two weeks ending on 05/01/2010 at 11:59 PM.  Anyone who wants to nominate a song will have to write a blog post detailing the contest and either a video or a link to a video that showcases the song they are nominating.  Please write a short reason for why you think the song you are nominating is the worst of the lot.  Come back to this post and leave a link to your post.
The second stage is that I will pick my 5 "favorite" nominated songs which will be announced in a second blog post.  You will then have1 week, starting on 5/2/2010 and ending on 5/08/2010, to vote for your pick for Worst Sex Song Ever.
And Here Is The Reward:  The winner will get a $15 itunes giftcard.
I'm going to nominate a song as well, though it won't be eligible to win.  I'm going to nominate "Peaches and Cream" from 112.  This is another song that I didn't mind too much when it first came out but when I listen to it now or watch the video, I find myself cringing just a little bit.  The imagery in the video, with the falling peaches dripping juice just isn't neccesary.  We already know what the song is about, we really don't need to be grossed out by produce.  One of my pet peeves with sex songs is we don't need to be told or asked whether or not we get it.  If you need to explain it or wink at us, come up with a better analogy, don't say "know what I mean".  So with no further ado, here is the video for the song.
Posted by Ryan at 10:42 PM

OMG this is hilarious! I can't wait to see what people come up with because you're right - there are a lot of bad sex songs out there. The first one I thought of was Def Leppard's Pour Some Sugar on Me - love the music but the lyrics suuuuuck!

Too funny! The first song that came to mind was The Reflex by Duran Duran...used to love those guys. Can't wait to see the nominations!

Okay, here's my post detailing the awfulness that is Pour Some Sugar on Me: http://misfitsalon.blogspot.com/2010/04/win-15-itunes-gift-card-for-sex-gone.html.

And only after looking at the lyrics did I notice that there's a line about "peaches and cream." Ha!

What a fun and creative contest! I look forward to seeing all the entries you receive.

What's that song about doing it doggy style while watching the X-Files? That one was pretty bad.

Great contest. Too fun! I'd like to nominate a classic by The Who: Squeeze Box. The concert video is old and boring, but the lyrics - all that talk about Mama and Daddy - still make me queasy.

Here's the link to my Song Gone Wrong

Haha! Fantastic! Love this idea. I have a good one!

HAHA "Sugar loaded candy cane" you'll get a laugh out of this even if it does not get passed the first round ;)

crap, someone meet me to squeezebox. I never knew half the lyrics of songs I listened to in my teens. Discovering them a decade later was shocking.

As soon as I read about this contest, one song came to mind, it's relatively new. My 14 year old daughter pointed it out to me when it came on the radio. I couldn't believe it.

I will write a blog post & return to let you know when it will appear, with a link.

What a fun contest. Okay here goes. My pick is "Little Red Corvette" by Prince. The link for my blog is here: http://lisadgibson.blogspot.com/2010/04/sex-gone-wrongsongs-done-badlycontest.html

I'm back, with a link to my post about your contest and my nomination of "Rude Boy" by Rihanna: