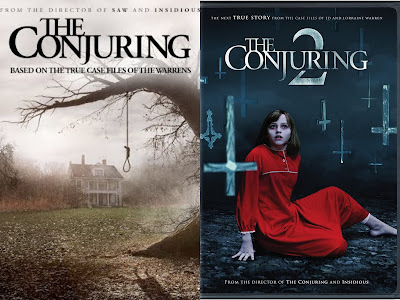 I was planning on watching the 3rd Conjuring movie, and since it's been so long since I saw the first two, I figured I'd rewatch them before diving into the new one.

I saw The Conjuring when it first came out, but for whatever reason, I couldn't remember that much about it. The little I did remember was more along the lines of how hot Patrick Wilson looked in those form fitting pants. Last night I turned off all the lights, got comfy on the couch with a blanket, pulled up Netflix, and pressed play. I tried not to think about what I was watching, and I did everything I could to get lost in the tale. I quickly realized why I didn't remember much about it the first time around the track, it just never sunk its teeth into me. On paper, I should love it. Haunted houses are my jam. I can even objectively say it's an okay movie, just maybe not for me. I did relish the sight of Patrick's ass. Big bonus.

I wasn't deterred though. I vowed to emulate Don Quixote, and finish my quest. I just decided to go to sleep first. I also ranted on Facebook this morning, went to Dillard's to buy a few shirts, stopped in at Walmart for a few toiletries, and ate a cookie at Barnes & Noble. Once I was back home, I was resolved to keep fighting those windmills. So once again I turned off all the lights, got comfy in bed, pulled up Netflix on my tablet (thinking a more intimate view might help), and pressed play on The Conjuring 2. After the whole opening segment had run its course, I realized I had in fact never bothered to watch this one. I was actually a bit relieved. I figured since I would have absolutely no memory of it, I would probably get lost in the story easier, and I would perhaps like it more. After the first 20-40 minutes, I was sure that was going to be the case. I found myself so engrossed with what was happening to this family, that my heart was doing joyful cartwheels. Then the television crew interviewed the family, and it was filmed so oddly, that it pulled me right out of the story. And it was downhill after that.

Even with my lackluster experience, I don't consider it a waste of time. Watching the two movies back to back helped me to figure out why I seem to end up so disconnected from what I'm watching. And as much as I love Patrick Wilson's ass, I'm going to have to blame the Warrens for my ho-hum reaction. It's not as if Patrick and Vera Farmiga are turning in bad performances. They are actually quite brilliant in their roles. It's more as if I'm completely disinterested in their characters. When the families, of both movies, are the focus, I'm fully immersed in their struggles and fear. When the focus shifts to the Warrens, I start thinking about fatbergs and what book I'm going to read next.  It's like I'm watching two different movies, either of which I would enjoy, but the  combination of the two just leaves me feeling disjointed and confused. I really wish they were more like Elise in the first Insidious movie or Tangina in Poltergesit, essential to the story, but not the fulcrum the action relies upon. The Warrens are the Hercule Poirot of horror.

I'm still probably going to watch the new one, especially since it has a different director. I'm just not expecting all that much.

For the record, fatberg is not a typo. Google it if you don't believe me.

A good ass in the movie, noted, lol